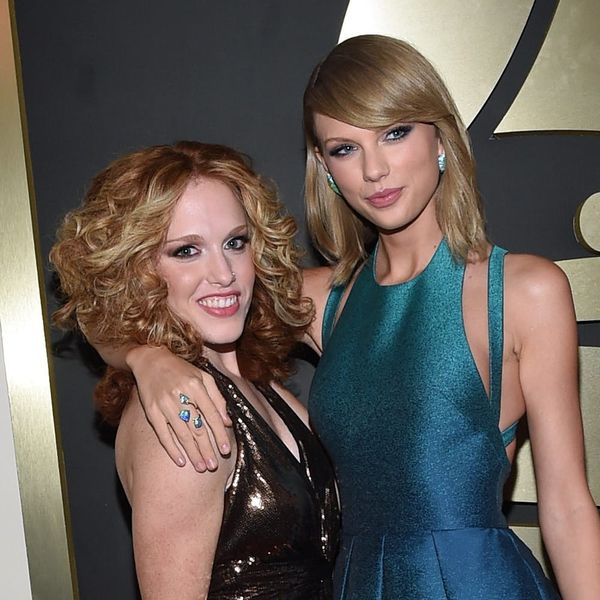 Taylor Swift has a LOT going on right now. After a four-year musical hiatus, the reigning queen of pop is back, dropping not one, but TWO killer singles, all within the space of weeks. Still, the 27-year-old has plenty of time for her oldest and most loyal of squad members, as she proved when she pulled bridesmaid dutyonce more for BFF Abigail Anderson’s nuptials to photog Matt Lucier.

See photos of Taylor Swift as a bridesmaid in her best friend's wedding https://t.co/fEMkgSYGRV

Jetting off to Martha’s Vineyard, the “Ready for It?” singer was snapped dutifully helping the blushing bride up the steps of Old Whaling Church in Edgartown, Massachusetts, as she held the blush train on her bestie’s soft pink Stella York gown. Swift looked rather stunning herself, stealing the show in a gorgeous burgundy frock with a halter neckline, which reportedly matched the other bridesmaids’ dresses. She kept her shoulder-length locks loose and wavy, pairing the look with a berry lip to match her gown.

Despite the serious look on her face, she was undoubtedly happy for the blushing bride, who got engaged in June of last year. After all, she and Anderson go way back. In fact, the friends have been more or less inseparable since meeting on the first day of high school, a fact the chart-topper famously documented in the lyrics for her single “Fifteen,” crooning, “You sit in class next to a redhead named Abigail / And soon enough you’re best friends Abigail gave everything she had to a boy who changed his mind / We both cried.”

Taylor Swift's BFF Abigail Anderson got married today and the singer was there as a bridesmaid! See all the photos: https://t.co/hnkwfDbVdV

The girls have famously kept in touch over the years: Back in 2015, Anderson accompanied her famous pal to the 57th Grammy Awards. Later that same year, the Grammy-winner surprised her bestie with a private acoustic set from her favorite artist, Dashboard Confessional, for her 25th birthday, and this past holiday season, she once again paid a visit to the fiery redhead (and one adorable pup).

It looks like both their tears have dried since high school, with Anderson finding an ever-lasting love to call her own… and maybe Taylor too, if fan theories surrounding her newest hit are to be believed?

Which celeb would be your dream bridesmaid? Tweet us @BritandCo.