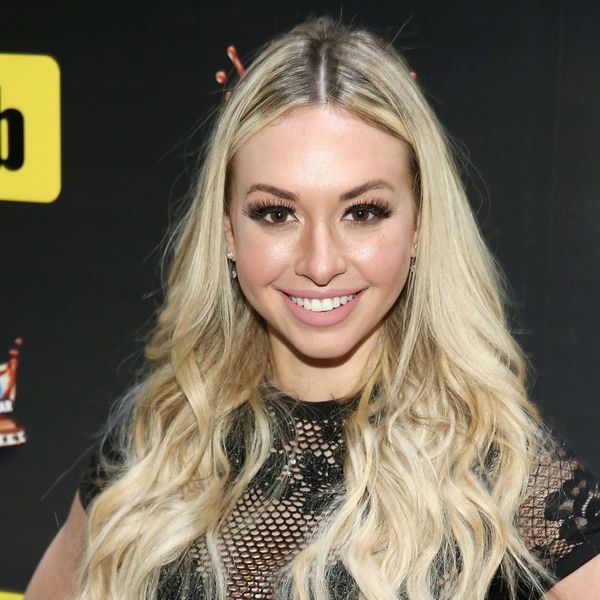 Corinne Olympios hasn’t exactly had an easy go of it when it comes to finding romance. Since we first met the brazen blonde on Nick Viall’s season of The Bachelor, she’s certainly seen her fair share of heartache: She was unexpectedly sent home just ahead of making the final three in the show’s 21st season, and though it appeared that she’d found love elsewhere shortly after, her controversial, if short-lived stint on Bachelor in Paradise brought turmoil to her personal life once more when production was shut down on the show over allegations of “misconduct” involving Olympios and fellow castmate DeMario Jackson.

Now, despite the fact that boyfriend Jordan Gielchinsky offered up a statement of unwavering loyalty and support post-Paradise, the two have officially called it quits. “I have known Corinne for over 10 years and as a friend or a boyfriend, she will continue to have my unwavering loyalty and support until I decide there is a legitimate reason not to give it,” he said at the time of the incident.

While our favorite corn advocate didn’t divulge the details surrounding their breakup, she did confirm to US Weekly that the two are no longer an item. “We’re not together anymore,” she confessed.

That doesn’t mean the 24-year-old is exactly heartbroken, though. According to the outlet, she’s seeing someone now, which she says “is going really well.”

everyone: before making your assumptions, watch my interview with @chrisbharrison next week to hear it straight from me #bachelorinpardise

Her career seems to be on the upswing, as well: As The Hollywood Reporter reports, in addition to a new man, she’s also got two new shows in the works. “I do have a [reality] show in the works and I’m also working on a scripted show with one of my favorite producers,” she revealed.

With an on-camera interview with Chris Harrison set for Tuesday night, we’re sure to get even more details on all the recent developments in her life, as well as her thoughts and feelings about the unfortunate events that occurred in Mexico. “Everyone thought they knew what happened,” she told THR. “It’s going to be really great to finally tell my side of things, through my eyes.”

Would you watch Corinne in a new reality setting? Tell us over @BritandCo.

Nicole Briese
Nicole is the weekend editor for Brit + Co who loves bringing you all the latest buzz. When she's not busy typing away into the wee hours, you can usually find her canoodling with her fur babies, rooting around in a bookstore, or rocking out at a concert of some sort (Guns N' Roses forever!). Check out all her latest musings and past work at nicolebjean.com.
love
Celebrity News
love the bachelor
More From Celebrity News