20 Modern Duvet Covers to Make Over Your Bedroom 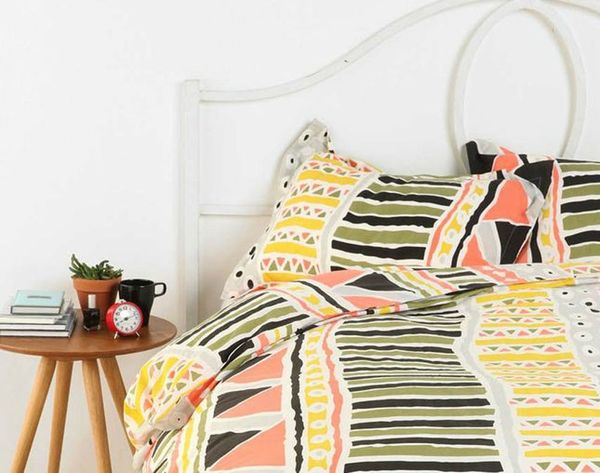 There’s nothing we like more than lounging in bed with a mug of hot chocolate, our favorite chocolate chip cookies and a few reruns of Scandal. Between gray skies and blustery winds, not to mention the mountains of snow or rain heading our way soon, spending a lazy day in bed sounds more and more enticing… especially if you’ve got a colorful duvet cover to pull around you. No matter what the weather looks like outside, we’ve got 20 duvet covers that will keep you warm and stylish all winter long.

1. Aari Embroidered Duvet ($528+): There’s nothing we like more than a bright, bold pattern, and this duvet cover made from organic cotton is exactly what we had in mind.

2. Hand-Block Arrows Duvet ($249): We’ve got arrows on our totes and tanks, so our bedspread seems like the next logical place for this design trend. Add a few colorful throw pillows, and you’ll have a stylish and modern room in seconds.

3. Sun Yellow Crinkle Duvet ($89+): Outside might be gray skies for days, but inside your bedroom, you’ve got enough sunshine to keep you going through the winter.

4. Paris Map Duvet ($129): You’ll be dreaming of chocolate croissants and afternoons spent strolling through the Louvre with this colorful duvet. Impress your friends with your extensive knowledge of those windy Parisian streets, even if you’ve never gotten your passport stamped.

5. Tradewinds Duvet ($198+): Speaking of traveling… snuggle under these covers, and you’ll be a geographic expert in no time. If only we’d had this during those fifth grade geography lessons…

6. Terrific Terrarium Duvet ($90): For all us brown thumbs who never met a plant we couldn’t (accidentally!) kill, here’s your indoor garden solution. Now we’re off to find that sleepy fox pillow.

7. Southwest Geo Duvet ($89): Modern meets Texas-chic with this bold pattern. All you’ll need is a set of faux antlers, and you’ll have a tiny Southwestern paradise.

9. Paint Play Two Duvet ($129): The dual-color brushstrokes on this fabric are sure to inspire the artist in you. (No one will ever know you failed macaroni art in kindergarten.)

10. Lindi Fringe Duvet ($228+): If we could put a tassel around all our blankets and pillows, we totally would, but we’ll just start with this duvet.

11. Geo Lines Quilt ($169): Okay, you caught us. This isn’t exactly a duvet, but the pattern on this quilt is so pretty, we couldn’t leave it out. If you’re not ready to commit to a patterned duvet cover, then a quilt is the perfect substitution.

12. Garden Buzz Duvet ($228+): Mary, Mary, quite contrary, how does your duvet grow? With red and blue flowers, apparently!

13. Dusted Chimes Duvet ($488+): Arrows and lines mix to create a simplistic, modern pattern on this bedding. With that hint of golden yellow, we’re totally sold.

14. Happy Stripes Duvet ($129): Does your favorite color vary depending on your mood? This bright option will keep you covered (literally), no matter how you’re feeling about pink or purple.

15. Floral Scarf Duvet ($79+): This gorgeous cover certainly lives up to its name. Pair it with colorful pillows or keep things minimalist and white — no matter what your design scheme is, you can’t go wrong with this vintage print.

16. Dots and Stripes Duvet ($139+): Those winter blues won’t stand a chance when you’re lounging under these cheerful white polka dots.

17. Pattern Block Duvet ($99+): Why settle for one pattern when you can have five? This duvet proves that all you need is a cohesive color scheme to bring bold patterns together.

19. Beamscape Duvet ($129+): Two of our favorite design trends, watercolors and chevron, come together in one fantastic way with this duvet cover.

20. Altiplano Duvet ($79+): Leaping bunnies and stately birds join forces on this Altiplano-inspired duvet cover that will have you feeling like a globetrotter without ever leaving your bed.

Do you prefer a bright duvet or a neutral one? Tell us why below!