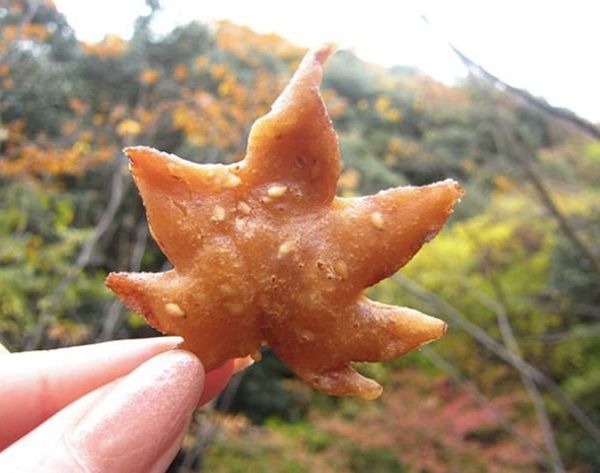 When we think of fall we think of leaves — green, yellow, red, brown — beautiful, but mostly just pretty to look at, maybe to use as the backdrop for an Instagram or two. But over in Japan, leaves have taken on a new role…. as a festive snack.

Yep, you heard us right. In the Osaka area of Japan, you’ll find a crispy treat, called momiji, which is made by frying Japanese maple leaves in tempura batter. But not the freshly fallen kind (those are universally best left for raking up and jumping in). The foodies in the city of Minoh in North Osaka usually use leaves that have been preserved for a year in salt barrels before they’re fried. Once the next year rolls around, they are then dipped in a slightly sweet tempura batter made with sugar and sesame and fried for about 20 minutes until crisp.

From what we’ve seen, it looks like the salt barrel step isn’t always involved, but we’re guessing it probably adds a pretty delicious salty-and-sweet element to the snack. If you’re throwing an autumn dinner party and want to really spice things up with this thousand-year-old Japanese delicacy (and soon-to-be food fad), go ahead and give it a shot! Try a classic recipe, or be bold and give it a culinary twist with maple syrup and figs. We promise it will be the most show-stopping dish on your dinner table this season.

Will you be salting your leaves for a fall feast? Or do maple leaves seem soooo not your thing? Tell us how daring your palette is in the comments below.

Cortney Clift
Cortney is the senior writer and special projects editor at Brit + Co. She typically covers topics related to women's issues, politics, and lifestyle. When she's not buried behind her computer you'll find her exploring New York City or planning her next big adventure.
Recipes
The Conversation
Reviews:
More From Recipes