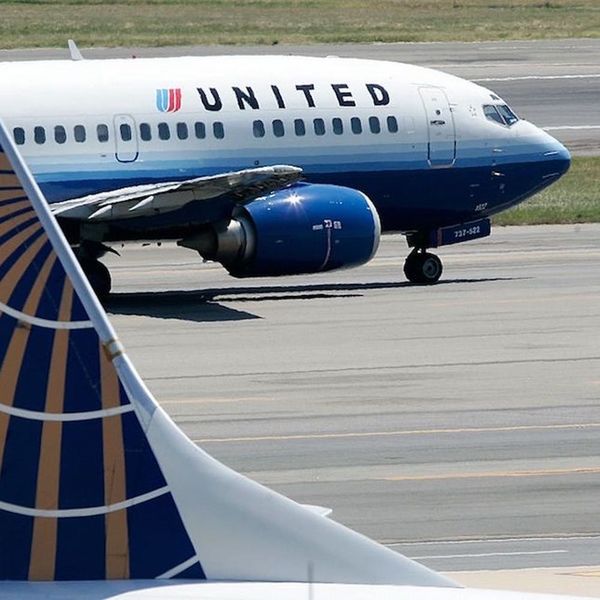 More trouble for United and a new look for Katy lead this morning’s top news stories. Check those and more out below in today’s Morning Buzz.

1. Yesterday, disturbing video of a United Airlines passenger being violently dragged off of an overbooked flight went viral, and today the internal email sent to employees following the incident has been uncovered — and it isn’t helping matters. CEO Oscar Munoz blamed the passenger for being “disruptive and belligerent,” and says that while he regrets the incident happened at all, he “emphatically stand[s] behind all of you.” (h/t CNBC; photo via Alex Wong/Getty)

2. Katy Perry buzzed off the rest of her hair and looks more like Justin Bieber or Kristen Stewart than Miley Cyrus now. Dang, Katy! After chopping off and bleaching her hair after her breakup with Orlando Bloom back in January, Katy took it one step further and buzzed her mane down to a barely there pixie cut. Spoiler: It looks totally amazing.

3. Alexis Bledel finally spoke out about that Gilmore Girls: A Year in the Life ending. The spoiler statute of limitations has passed by now, but warning: spoilers ahead. The Netflix revival’s famous last four words consisted of Rory telling her mom Lorelai that she was pregnant. It turns out fans weren’t the only ones who were shocked — Bledel admitted in a recent panel that it caught her off guard too. “I had told [creator] Amy [Sherman-Palladino] that I hoped Rory would end on a high note after all of her hard work,” she said. “I wanted to see her succeed and be thriving. So it was a hard thing for me to digest.” Whether or not she’ll still get the chance to see Rory thrive remains unseen, but at the moment, it’s not sounding great. (h/t ET; photo via Alberto E. Rodriguez/Getty)

4. Holy crap: Starbucks’ Insta-famous pink drink is now an *official* menu item! Starting today, the secret-menu Pink Drink that took the internet by storm last spring officially joins Starbucks’ permanent menu. The tasty drink is made with Strawberry Acai Refresher, passion fruit and acai accents, and coconut milk, and is topped with a scoop of strawberries. “This delicious and refreshing drink is a celebration of our customers’ and baristas’ creativity,” Vivienne Long, Starbucks vice president, US Retail Beverages said in a statement. “We’re thrilled that the beloved Pink Drink is joining the Starbucks menu, just in time for the warmer spring months.” SAME. (Image via Starbucks)

5. Disney x Uniqlo is here and it’s everything we’ve dreamed of. After getting a sneak peek of what designer Olympia Le-Tan’s Minnie Mouse items would look like, we’ve had high hopes, and the collection (released today) lives up to the hype. The “Minnie Mouse Loves Dots” line features a vintage rendition of the famous Disney mouse on tees and accessories that also feature — you guessed it — lotsa polka dots. With prices ranging from $10-$20, there’s no reason NOT to add some Minnie to your spring style. Check out the whole collection here. (Image via Uniqlo)

6. Quote of the day: “People have to start respecting the vagina. Until every man is fighting for our rights, we should consider stopping having sex.” Janelle Monáe reveals her unconventional way to fight sexism as one of Marie Claire‘s Fresh Faces of 2017.

What do you think of Janelle Monáe’s anti-sexism strategy? Let us know @BritandCo!