Your Guide to a Weekend in Philadelphia 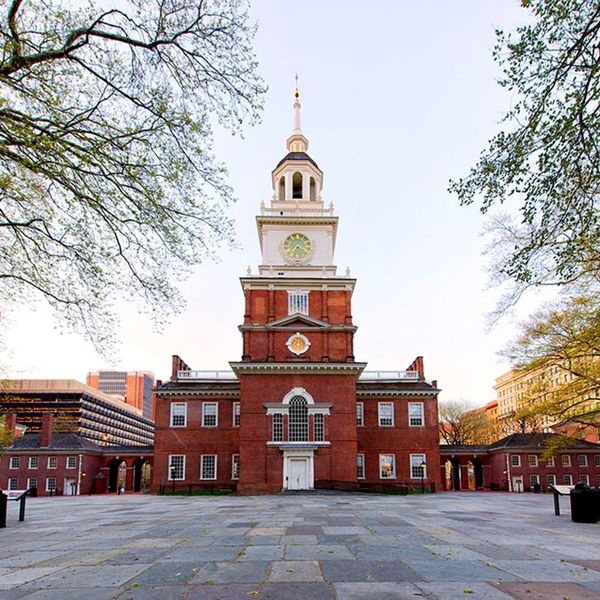 You don’t have to be “in West Philadelphia, born and raised” to enjoy a visit to the City of Brotherly Love. After all, thanks to the city’s underdog Super Bowl victory this past year, the Eagles are now America’s team. There’s never been a more fitting time to visit this city in Pennsylvania, which is why Philly is our next carless weekend destination.

For New Yorkers, Philly is a surprisingly easy weekend trip with a much shorter travel time than our fair city to the north (looking at you, Boston). An Amtrak train from NYC will bring you to Philadelphia in under an hour and a half, while the Bolt Bus will drop you off a mere 30 minutes later.

Philly’s mastered the art of the strong first impression: 30th Street Station is absolutely stunning and boasts a beautiful bar and restaurant that puts Tracks, the underground bar near the LIRR at Penn Station, to shame. But there’s more to the city than its Instagram-worthy transit centers. Read on to find out why Philly is the best weekend getaway for cheesesteak-lovers, historians, and everyone in between.

As for neighborhoods in Philadelphia, we recommend Rittenhouse Square (featured above) for the most aesthetically pleasing surroundings for your accommodations. Staying in The Rittenhouse Hotel is magical any time of year, but especially in the wintertime. Spring may have its blooms, but we prefer the holiday lights twinkling around the square in December. If you’re lucky enough to catch it blanketed with snow, make sure to snap plenty of photos.

If you’re staying in Rittenhouse Square in the summer, try to score a guest pass to the members-only pool at the Lombard Swim Club. Nicknamed the “Rittenhouse Swim Club” by the pool’s owners, this urban oasis is not just a place to take a dip but also to see and be seen in the city.

Luxury lovers don’t need to confine themselves to just one neighborhood. A new Four Seasons is opening soon in Center City, at the Comcast Center in mid-2019. Not only will the downtown hotel occupy the tallest tower in the city’s skyline, resting atop a 60-story architectural landmark, but it will feature restaurants helmed by Michelin-starred chefs and James Beard Award-winners, not to mention its very own infinity pool. (Take that, Lombard).

For the music (and cocktail) fans, the jazz-themed Cambria Hotel Philadelphia Downtown Center City has the only rooftop bar on Broad Street. Ideally located for weekend travelers, the Cambria is a quick Uber ride from 30th Street Station. The hotel’s design incorporates local artwork that reflects its vibrant cultural surroundings: The Kimmel Center for the Performing Arts is right across the street along this stretch of Center City known as the “Avenue of the Arts.”

Other options include The Logan and Kimpton Hotel Monaco, and of course, there’s always Airbnb. Why waste an exorbitant amount of money on a hotel suite when you have places to go and people to see? Don’t let us hold you back, though. If you want to splurge, this is the place to do it.

You can’t visit Philly without educating yourself on the history of our Founding Fathers. Old City is the birthplace of America’s independence, after all! Lace up your sneaks and go on a historic walking tour, where you can visit iconic landmarks such as the Liberty Bell (natch), Independence Hall (the birthplace of the Declaration of Independence as well as the Constitution ), and Old City Hall (home to the Supreme Court when Philadelphia was the nation’s capital).

If you’d rather explore on your own (and don’t want to commit an entire morning to a guided tour), the Historic Philadelphia Virtual Tour offers a choose-your-own-adventure audio accompaniment to your day. History buffs can go for The Independence Tour or The Franklin Tour, and there are other options that focus more on art and culture.

Or, you can always pay for the Constitutional Walking Tour, where you’ll definitely learn something new on your trip (and force yourself to not get distracted by the city’s myriad other sights, sounds, and activities). Speaking of alternate (but equally enlightening) activities, visit the old waterworks at the Philadelphia Museum of Art or the Impressionists at the Barnes Foundation (which houses the largest collection of Impressionist art in the country). The Rodin Museum is nearby if you want to have an entire afternoon à la française.

If you’re more about science than the arts, the Mütter Museum is the place for you. The Center City medical museum is located in the College of Physicians of Philadelphia, and we encourage you to go morbidly wild with the fascinating anatomical exhibits. Afterwards, stretch your *own* legs with a run on the Schuylkill River Trail, one of the most picturesque running paths in America (aside from those around the National Mall in DC — though it’s fitting the former capital would concede to the current one here too).

Old City isn’t only historic; it’s also great for shopping. On the first Friday of every month, Old City streets stage an epic exhibition of the neighborhood’s galleries, shops, and restaurants, and trust us, you won’t leave empty-handed. The shops at Center City, meanwhile, offer an array of fashionable boutiques, like Skirt, Intermix, Barneys, and Shop Sixty Five. Last, but certainly not least, Reading Terminal Market is one of the country’s largest and oldest public markets. Established in 1893, it’s filled with enough food booths, flower shops, fruit stands, and vintage books to satisfy every craving you could possibly have.

Speaking of cravings, we’re onto our favorite, albeit hotly contested, Philly pastime: Trolling the city for cheesesteaks and declaring allegiance to your favorite one. While the much-hyped rivalry is between Pat’s and Geno’s (neighboring rivals), locals are more likely to be spotted at Jim’s, Steve’s, Tony Luke’s, or Dalessandro’s. Whichever one you pick, our only recommendation is to go all in on the Cheez Whiz. In local parlance, you want it “wit wiz.” Cheese is always a good idea — even if it comes out of a can.

Start your morning off right with an early trip to West Philadelphia, home of the University of Pennsylvania and pre-Bel Air Will Smith, to put your name on the list at Farmacy RX. The restaurant doesn’t take reservations, so be prepared to wait — but it’s worth it for the pastry basket alone. One of the most unique (and convenient) aspects of the Philadelphia restaurant scene is its pervasive BYOB culture. So just bring some Champagne and Farmacy RX will supply the orange juice for your mimosa enjoyment, which is not a terrible way to start your day.

If you’re visiting in the warmer months, reserve a table (and order the cheese plate) in the verdant outdoor space of Talula’s Garden. Of course, the restaurant features a beautiful interior as well, and the farm-to-table menu is above and beyond anything else you’ll find in the city.

When it comes to dining out, Stephen Starr has a lock on the Philly food scene, and his restaurants live up to the hype. Pretend you’re in a Parisian cafe at Parc, a French bistro on Rittenhouse Square (pictured above). If the weather is nice, they even offer sidewalk seating. It’s the closest you’ll feel to the Place des Vosges without buying a plane ticket to Charles de Gaulle. Otherwise, try El Vez: This top-notch Mexican restaurant boasts a circular bar with one of the largest tequila selections in the city — all the better for your margarita happy hour.

For post-dinner cocktails, venture back over to West Philly to check out Fiume. Located in the upstairs of an Ethiopian restaurant on 45th and Locust, this bar is the least pretentious (and coolest) speakeasy you’ve never heard of. The beer and cocktail list will make you wonder why you ever thought of going anywhere else.

Overall, Fishtown is the best neighborhood for nightlife, and Kung Fu Necktie is always a reliably good time. Unlike most Fishtown bars (which tend to be cramped), Kung Fu Necktie is spacious, with two floors, booth seating upstairs, and excellent live music. Otherwise, Barbary is a great spot for indulging in the $5 PBR-whiskey shot combo, letting loose, and dancing all night. Johnny Brenda’s also rocks a hip-hop dance vibe, though the institution’s defining characteristic is its late-night diner, perfect for when you’ve worked up a sweat and start craving carbs.

Closer to Center City, The Dolphin Tavern is another lively dive, with rainbow lighting and cheap drinks. Head there for one of their themed evenings (preferably Drake night) and prepare to dance the night away. Or, if you’re looking for a more collegiate vibe, swing by happy hour on Thursdays. The tavern is dynamic, just like the city itself.

What are your favorite places in Philly? Tag us in your go-to spots on Instagram @BritandCo.

Katherine Parker-Magyar
Katherine is a freelance writer focusing on travel, culture, lifestyle, and politics. Her work has appeared in The Week, Tasting Table, Elite Daily, POPSUGAR, and Electrify, among other publications. She's traveled to all 50 states and 40 countries, but calls New York City home. Follow along on Instagram at @katherineparkermagyar or visit her website at www.katherineparkermagyar.com.
Carless Weekend
Travel
Carless Weekend Travel Vacation