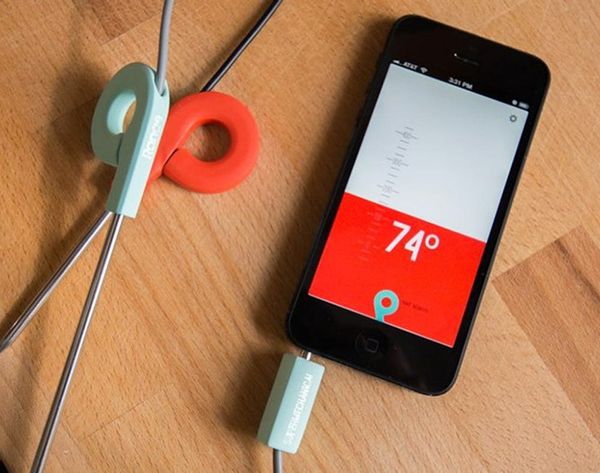 We’d all be master chefs if we could take the guessing out of cooking—no more biting nails about overcooking that roast, or worrying if those eggs you bought a week ago at the farmer’s market were still fresh. Well, there’s an app for that. Several, actually, each accompanied by a smart gadget that are sure to save home cooks from dinner party failure in many different culinary scenarios. Check out these nine must-have smart gadgets you’re gonna need in your future kitchen.

1. Prep Pad ($150): Achieve a perfectly balanced meal with Prep Pad—literally! this sleek countertop smart scale assesses each ingredient up to 15 lbs that’s placed on it, and connects with an iOS app to give you precise nutritional information based on weight. The scale is easily wipeable—the surface is made from a non-porous, recycled material—and just nine inches wide and less than one inch tall, so it’s super easy to store.

2. HAPIfork ($100): Who needs a nutritionist when you’ve got a fork? HAPIfork, that is: the smart fork that monitors how quickly you eat. If HAPIfork senses you’re scarfing your grub rather than taking paced bites, it vibrates in your hand until you take it easy (way better than your mom yelling SLOW DOWN!, if you ask us!). With its companion iOS or Android app, you can check stats like how long it took you to eat, how many times you brought the fork up to your mouth, and how successful you’ve been at slowing your pace over time—according to HAPIfork, a slower eater is a skinnier eater.

3. Lapka Organic ($79): Feeling dubious about exactly how organic the food at your corner market is? If you don’t entirely trust the label, rest easy knowing you can definitely trust Lapka Organic. The pretty USB-shaped block contains a probe that measures the level of nitrates on your raw food, which determined whether or not it was produced using synthetic fertilizers or not. The corresponding app will let you know whether these levels are acceptable or not—that means you can shop and eat smarter!

4. TellSpec ($320): This unreal gadget made a hugh splash on indiegogo—raising almost four times its $100 K goal!—and it’s easy to understand why: just wave TellSpec over your food, yeah, just like Harry Potter would, and the computer mouse-like gadget detects allergens, chemicals, nutrients, calories, and ingredients in anything you eat or drink (take that Sherlock!). For people with serious food allergies, it seems like the sidekick you deserve.

5. Egg Minder ($70): Pro bakers, serious chefs, and anyone egg-obsessed, EggMinder is the kitchen gadget is for you. This smart egg tray is as inventive as the rest of Quirky’s culinary-focused creations, alerting you when your egg inventory is low or when they’re going bad, so that you’re never in a scramble for eggs again! (ah-cha-cha!)

6. Smart Knife: Okay, this concept is crazy—a smart knife that can give basic information on the quality of your food as you slice it! Though it’s in early stages of development, the Smart Knife’s blade would double as a tablet (mind=blown) to show nutritional information, as well as gauge freshness and contamination levels based on readings it takes from sensors on the blade’s tip. No word on what it’s made out of (can you break into a coconut with this bad boy?), or how easy it would be to clean, but regardless, we’ve got a place reserved for it in our knife block. (via Design Lab)

7. Range ($54+): No more staring into your oven window, no more guessing how pink is too pink in your chicken, no more Thanksgiving disasters! Range takes the guessing out of cooking. Just place the colorful smart thermometer in your meat, set your desired temp on its companion iOS app, and Range will alert you when your roast is cooked to juicy perfection.

8. Wemo Smart Crock Pot Slow Cooker: A smartphone connected crock pot? This has to be the laziest smart gadget we’ve ever seen…and we’re obsessed. Control the cooking time, temp your slow cooker (may we suggest the name Crock Bot?) while you’re out and about, and even turn the device on or off as you please, all from the convenience of your smartphone. (via Belkin)

9. Brewbot ($2,830): Nail your craft brew every time with Brewbot, the smart beer maker that helps to automate the brewing process so you can spend your time tinkering with your precious recipe. While the rustic-meets-industrial design has us swooning, its size and price tag means realistically it’ll end up in the workspace of serious brewers only (hey, they’re always our Home Brew Pinboard!).

What smart kitchen gadgets have caught your eye? Tell us in the comments below.