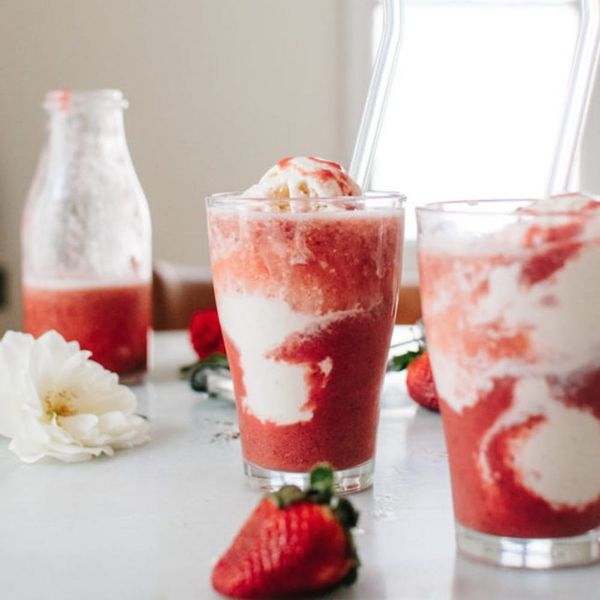 Oh, hey there, sunshine. Nice to *finally* see you! With warmer weather comes the highly anticipated ice cream season. Instead of jumping right into sundaes and ice cream cakes, how about you dip your toe in the water with an ice cream soda or two? Wine floats are perfect for girls’ night or after a date, but soda floats can be enjoyed anytime by the whole family. We dug up the 14 most dangerously delicious recipes that’ll kick off summer with a bang! Scroll down for some serious mouth watering.

Think of this blood orange float as a boujee take on an Orange Julius. When that nostalgic craving hits, you’ll be armed with an epic recipe that’s better than anything you could order out. (via The Flavor Bender)

Every day deserves a little bit of fizz and zest. This float is made with a blueberry-lime syrup, sparkling water, and quality vanilla ice cream for a delightful after-dinner treat. (via I Heart Nap Time)

You’ll want to enjoy this classic flavor pairing with a greasy burger and fries for sure. (via Gringalicious)

When you can combine your daily caffeine habit with your daily chocolate habit, you don’t hesitate. Not only does this float contain homemade cold brew, but it also sports two shots of espresso. (via How Sweet It Is)

Who would have thought that homemade no-churn coconut ice cream, cola, and lime would make such a dream team? If an old-school soda float is your jam, this modern version will leave you shook. (via Dessert Now, Dinner Later!)

This vibrant dessert was made for a girls’ night in — just try not to snack on the roasted strawberries before it’s go-time. (via Kale and Caramel)

This très chic float uses Earl gray tea and lavender-blackberry syrup to flavor instead of fizzy soda. Use your favorite vegan vanilla ice cream to finish so it doesn’t compete with the other flavors. (via Snixy Kitchen)

Bananas, lemons, limes, oranges, oat milk, and sparkling water are the only ingredients you’ll find in this guilt-free float. Enjoy it with your brunch or as a bright mid-afternoon snack to boost your mood. (via The Chick Who Eats)

It doesn’t get more summery than a cold glass of peach tea, unless it comes with peach sorbet. (via The Cookie Rookie)

If you want a vibrant magenta hue to your float, prickly pear is where it’s at. Snatch them up ASAP and make the syrup to keep in the fridge for a rainy day. (via Club Narwal)

Ahhhh, the classic float. Simply add a couple scoops of vanilla froyo to a sundae glass and top with root beer, whipped cream, and of course… a cherry on top. (via Diethood)

When that chocolate craving strikes, you’ll want to have everything on hand for this outrageous soda float. Don’t forget to take an Instagram of it or it didn’t happen. (via Savoring the Good)

If you have a Soda Stream or similar appliance at home, then you can easily make your own sparkling drink out of any fruit juice you like. Try it with cold-pressed watermelon to make an instant refreshing float. (via Sugar and Charm)
Paige Johnson
Paige is a blogger, food writer and culinary master from Louisville, Ky. She's a newlywed who's obsessed with dogs and renovating her 117 year old home. When she's not working on her blog — My Modern Cookery — you can find her binge watching F.R.I.E.N.D.S with a triple shot latte in-hand.
Dessert Recipes
Dessert Recipes
Dessert Recipes Drink recipe roundup
The Conversation
Reviews:
More From Dessert Recipes