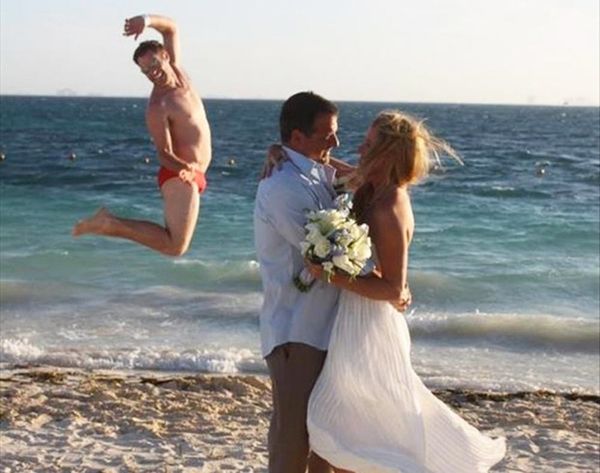 You tried. You really did. But somehow the fates were against you. Marauding llamas, jokester officiants and even Death combined to ruin what may have been a treasured wedding photo. But it’s okay, really, because now you can join the ranks of viral Internet stars. If you can’t stage a hilarious or creative wedding shoot on purpose, winding up with one or two accidentally-on-purpose snorters is pretty okay. Read on to enjoy other people’s wedding photo #fails. And when we say #fails, we mean it in the most loving sense. We’re laughing with, not at over here ;)

1. Llama-Bombed: This photographer captured a really sweet moment… for three. Mr. Llama doesn’t approve of your PDA. (via Caroline Tran)

2. Wedding (Photo) Crasher: Seaside photo ops are one of the big perks to a destination or beach wedding. But maybe next time you should ask your photog to warn you when a tidal wave is on the horizon. (via HuffPo)

3. Hover Bride: The jump pic is a classic. But now we know it doesn’t mix with a puffy skirt. (via Imgur)

4. PDA is Gross: Who cares if it’s your wedding day. Your flower girl and ring bearer are sure there’s some cootie swapping going on. (via Wedinator)

5. Speedo Man: If the waves don’t get you, another beach goer will. Cheerleaders everywhere are jealous of that C-jump. And if this image didn’t make it as the couple’s holiday card, we are very, very sad about that. (via Ellen)

6. F*** Proposals: We have so many questions about this grandma flipping the bird. Is it on purpose or is she just awkwardly putting food in her mouth? We may never know, but at least this adorable popping-the-question shot wasn’t actually ruined by a sassy grandma. It was just enhanced. (via Kerinsa Marie Photography)

7. Not the Veil!: Oh, DAD! Based on the look on that bride’s face, we’re pretty sure she disowned her father post-ceremony… or just laughed it off as one of the most memorable moments of the day. (via The Distraction Network)

8. Jazz Hands: We hope and guess that this is an inside joke between the bride and her groom. And we want to hear the story here. (via Team Jimmy Joe)

9. Haunted by Death: Umm… death — it’s like raaaain… on your wedding day? (via Imgur)

10. Creeper Chicken: If someone photobombed us in scary giant chicken suit, we might be afraid to go to bed that night. (via Wedinator)

11. Planking Pastor: Props to the pastor for getting in on the planking trend. (via Imgur)

12. Mythical Marriage: Let’s just say we FINALLY figured out why ladies used to ride sidesaddle with big skirts. Basically what you get is a centaur wearing a wedding dress. (via Jokes of the Day)

13. Whoops: You know you’re supposed to smash the cake in each other’s faces not on the floor, right? Eh, this is a better pic, anyway! (via Booms Beat)

14. The Grabby Groomsman: Hey, kids just have a hard time keeping their hands off of sparkly things. Fair warning. (via The Chive)

15. Cat (Butt)-Bombed: Anyone who’s ever owned a cat knows this kitty totally butt-bombed them on purpose. At least the landscape is nice. (via Viralscape)

16. Even Royals Have it Rough: Anglophiles the world over cooed when Wills + Kate shared not one but two(!!) kisses on the Buckingham Palace balcony. Micro bridesmaid Grace van Cutsem on the left did not share in their excitement. Maybe she’s just mad that she’ll #never be royal. (via Ace Showbiz)

17. Waterlogged: The pier breaking makes a pretty hilarious photo. And now the bride doesn’t need to schedule a trashing-the-dress shoot! (via Acid Cow)

18. Double Fail: Not only did this dude kick the bridesmaid in the face during his jump, he ripped his pants. We’re guessing this was his last time being asked to be a best man. (via Cosmopolitan)

19. Celebrity-Bombed: If you’re taking your wedding photos on a busy NY street, you expect a few clowns to try to get in on the shot. You might not expect one of them to be Zach Braff. This one might actually be a #win instead. (via Sascha Reinking)

PSA: Sorry about the image quality in some of these. All we can imagine is that the photographers were so surprised at what they saw through their viewfinders that they jiggled the camera.

Did your wedding shoot produce any photo #fails? Share the hilarity below!

Meaghan Pachay
Meaghan's love affair with cooking, crafting and all things DIY began at age eight, with her first reading of Little House on the Prairie. It shows no signs of petering out anytime soon.
Photography
Party
Photography Wedding Roundup
More From Party