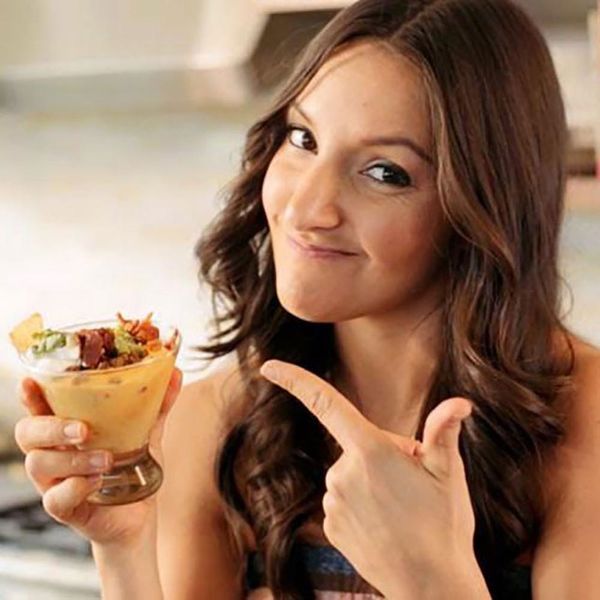 The Brit + Co office is filled with bright colors, DIY materials, tools galore, two adorable dogs (shoutout to Turkey and Brie) and… a whole lotta Texans! As one of them, I know that Texans have a lot to say when it comes to their food. Like, suuuper strong feelings about it. It might just be that there’s something about coming together over classic Tex-Mex food that instantly takes us back to those warm Texas nights, sipping Shiner Bock and two-stepping to some country classics in our favorite pair of worn-in boots. So, which Tex-Mex brings us Texan girls right back that Lone Star state of mind? Below, we’re revealing the seven dishes we miss the most + tips on how you can recreate them wherever you live. Now, go on and getcha’ some Tex-Mex!

Enchiladas are a tried-and-true Mexican staple, and Texans are die-hard fans. There’s something about the cheesy goodness that keeps us coming back for more. There are lots of options with enchiladas, from brisket-filled (YUM) to veggie or just cheese, but don’t let that gooey-ness fool you — the sauce is just as important. Here is a solid recipe from Texas Monthly to try. (via Texas Monthly)

Simply put, there is nothing like brisket. OMG. If you’ve been to Texas, we hope you’ve experienced brisket done right. It’s super versatile; you can have brisket tacos (andbreakfast tacos, an Austin staple), enchiladas, a sandwich or you can just eat the stuff by itself. If you’re from Texas, you’ve been to The Salt Lick. If you’ve been to The Salt Lick, you’ve eaten their world-famous brisket and you were forever changed because of it, and now you can replicate the lip-smacking-good flavor right at home. Trust us, you’ll want to find the 14 hours to spare ;) (Photo via The Salt Lick, tutorial via Food Network)

Chips and salsa are the Texans’ equivalent to bread and butter being put on a table when you sit down to dine (restaurants elsewhere, take note!). Chuy’s, a Tex-Mex institution, is famous for its game-changing jalapeño ranch sauce, which lives next to the salsa on each table. It’s extremely addictive and tastes great on everything. Even if you aren’t a fan of ranch dressing (I personally can’t stand the stuff) you will probably enjoy this mildly spicy sauce. (via Capturing Joy with Kristen Duke)

Some say that people who order fajitas just want attention — the meat + veggies audibly sizzle throughout the restaurant, inevitably causing heads to turn as other diners get a whiff of the flavorful, satisfying dish. Others say people who order fajitas just want a simple, stick-to-your-ribs filling meal. Texans strongly believe in fajitas, complete with all the fixin’s. Pro tip for when you whip up a sizzlin’ plate at home: Make sure you marinate the meat long enough! (via Travel Tex)

If you’re from Texas, you’ve probably (hopefully?) consumed a stuffed avocado. Trudy’s is an absolute must-have if you’re ever in Central Texas; their stuffed avocados are life-changing and worth at-home replication. You can load these up with basically any sauce of your choosing, although Victoria and I are partial to suiza sauce. This recipe might take a couple times to master at home, but once you do, you’ll be everyone’s favorite person. (via Yummy Addiction)

The Mexican Martini is the official drink of the State of Texas (not really, but it might as well be, because Texans love ’em). The story behind them is that an Austin bar employee returned from a trip to Mexico raving about a margarita that was served cocktail-style, straight up instead of on the rocks, and the Mexican Martini was born — with some fat green olives on top, of course. Here is a great recipe to try next time you want to play bartender. (via New York Times)

One *very* important thing to note here is that queso (liquid gold) was consistently mentioned during our office-wide Tex Mex poll. Queso is more than a foundational pillar of Tex Mex cuisine; it’s so much more than “just cheese.” No, queso is not nacho cheese (gasp!) and it’s most definitely not just melted cheese, either (the horror!).

Fellow queso enthusiasts will passionately explain that it requires a balanced blend of specific cheese, chiles, diced tomatoes and jalapeño. There are a ton of add-ins you can play with, like meat (beef, brisket, pork), beans, onions, sour cream, cilantro, peppers… the possibilities are endless. We know because we’ve dedicated A LOT OF TIME to making queso. Here’s a really great recipe for when you host a DIY queso bar!

Which of these recipes speaks to you the most? Share you Tex-Mex faves in the comments below!

Beth Wischnia
You can typically find this Texan writing, trying on a new lipstick, gabbing with her identical twin sister or volunteering at the local animal shelter. She finds inspiration from rosé, beauty products, Tex-Mex and cats.
Recipes
The Conversation
Reviews:
More From Recipes