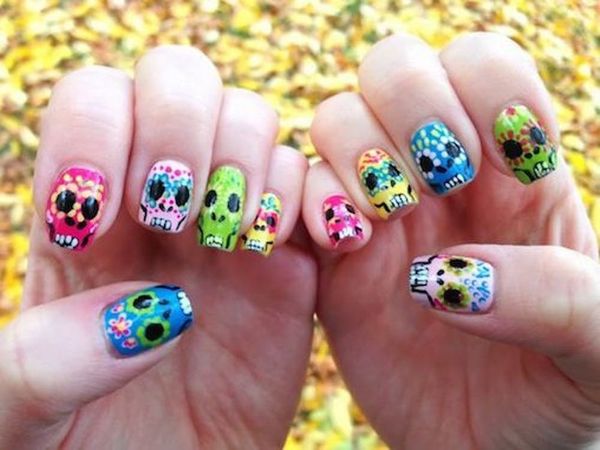 Extend your Halloween celebration a smidge longer this year by partaking in Dia de los Muertos. In place of jack-o’-lantern designs, ghastly ghouls and Frankenstein brides, pave the way for endless calaveras. (That’s sugar skulls, for the uninformed.) Here are 20 seriously stellar Dia de los Muertos-inspired manicures that would fit right in with any spirited festival or parade.

1. Roses Nail Art: While this mani is technically from a Cinco de Mayo celebration, we think the girly pink color palette, rose theme and sugar skull deserve to come out more than once a year. (via Pretty Squared)

2. Technicolor Candy Skulls: Who knew that sugar skulls could be so pretty?! Between the minimalist white base and technicolor eyes, this is one standout mani that shall not be limited to Dia de los Muertos. (via That’s Heart)

3. Day of the Dead Nails: BRB, we’ll be busy replicating this manicure. Complete with a step-by-step tutorial, you need not be a nail connoisseur to nail this design. (via Elle)

4. Once Upon a Time in Mexico Nails: Variety is the name of the game, folks. Why settle for a sugar skull when you can throw papel picado and scorpions into the mix? (via Acetone Files)

5. Hello Kitty Sugar Skulls: Just when you thought you had seen them all (sugar skulls, that is), we throw Hello Kitty into the mix. (via Storm and Stars)

6. Rainbow of Candy Skulls: Colorful much?! As what just may be the raddest manicure EVER, these rainbow sugar skulls are nothing short of amazing. (via Ms. Lazybones and the Morning Man)

7. Black and White Skeletons: A cross between our two favorite spooktacular holidays, these black and white skeletons (and sugar skull thumbs) are undeniably bone-chilling. (via Fashion Diva Design)

8. Sugar Skull Accent Nail: You know what they say: A pinch of sparkle goes a long way. Something tells us that this mani wouldn’t have nearly as much panache if it weren’t for the bejeweled embellishments. (via Miss Phibes)

10. Taste the Rainbow Sugar Skulls: They weren’t kidding when they said that this sugar skull mani incorporates every color of the rainbow… (via The Lacquerologist)

12. Simple Geometric Design: Yup, one sugar skull on the accent nail will do. For all the other nails, a vibrant pink and black geometric design gets the job done. (via Spektor’s Nails)

13. Classic Skulls: A no-nonsense skull mani minus all the distracting bells and whistles is sometimes exactly what the doctor ordered. (via Syl and Sam)

14. Mexican Zombies: When calaveras have exceeded their limit, don’t hesitate to dress up your nails with a hauntingly beautiful zombie design. (via Brush Me Blush)

15. Halloween + Day of the Dead: Candy corn, sugar skulls, cobwebs, oh my! A combination of Halloween and Dia de los Muertos, this is one festive mani. (via Fashion Magazine)

16. Celebratory Dia de los Muertos Nails: One glance at these colorful nails and you know there’s a fiesta on the horizon. (via Simple Art Reviews)

18. Sugar Skull Cat: Candy skulls, a charming kitty and even a glittery accent nail — we don’t mean to point out the obvious, but these nails are definitely the most cat-tastic we’ve seen. (via Japanese-Doll)

19. Sugar Skulls and Papel Picado Nail Decals ($6): Easy as peel, stick and go! Fake it ’til you make it with these festive sugar skull and Mexican cut paper flag nail decals.

20. Pretty Floral Design: For the bohemian bride-to-be with Spanish roots, take note. This mesmerizing calavera and marigold manicure is so pretty that you’ll want to get them in on the professional photographer action. (via Royal Milk Tea)

Which nail design will you be embracing for Dia de los Muertos? Leave a comment below or tweet us a picture!