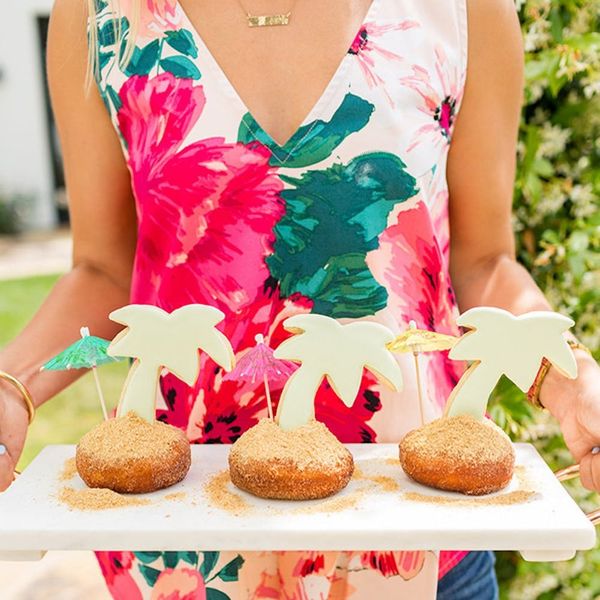 For simplicity’s sake, you don’t need the finer things in life to find peace of mind. Now’s the time to embrace a “less is more” aesthetic by transforming your morning routine for max productivity and getting organized before September arrives. Make it a point to enjoy the great outdoors during these last few weeks of summer. An early morning bike ride or dinner al fresco can do wonders for the soul. Cool down this weekend with these refreshing lemonade recipes, and scroll down to see what the stars have in store for you in this week’s AstroStyle horoscope.

Say it isn’t so! While the birthday celebrations might have sizzled out, that’s no reason to pout. You have SO many good things to look forward to, Leo! Like updating your resume and headshot for an upcoming career change or bringing in the moolah from a previous business deal. Speaking of money, do cash in your birthday lottery ticket this weekend or pick up a stray penny on the streets — winning is in your blood.

Read This: Putting in long hours at the office ain’t always easy, but someone’s got to do it. But actually. Here’s how to know when it’s time to quit your job. Turning your side hustle into a full-time gig is always an option too. (Photo via Getty)

Who runs this world? That would be you, Virgo! Kick off a month of celebrations with some bubbly and confetti birthday cake. If August was jam-packed with getaways and summer adventures, then September will be devoted to embracing the new. Between undergoing an ultra-glam makeover and embarking on a new career path, there’s something incredibly fulfilling about starting fresh.

Read This: It’s not too late to throw yourself a mini b-day celebration. Check out these 17 colorful tassel-themed party ideas that are festive AF. (Photo via Studio DIY)

It’s time to ditch the organized chaos for a more streamlined way of living. If you can’t see your bedroom floor (or have trouble navigating your desktop at work), then it may be time to call in the experts. Hire an interior decorator to help feng shui your home or try consulting Pinterest for game-changing organization hacks. That DIY IKEA bookshelf may not be a bad idea after all.

Read This: Cramped for space? Say no more. Look no further than these 11 small space hacks to steal from this blogger’s NYC studio.

Don’t be that loner chilling in the corner at the party, Scorpio! Ditch the all work, no play ‘tude for some socializing on Taco Tuesday (endless chips and guac FTW!). Just because you’re a successful entrepreneurial type doesn’t mean you can’t make friends (or even potential collaborators) with a fellow #girlboss. Ditch your hermit crab shell by test-driving a new hobby that forces you to interact with a different crowd.

Read This: Cool the nerves and jump right in with these six brilliant networking hacks every introvert should know. (Photo via Getty)

While it may be hard to believe, 2017 is only four months away. Cue the goal-setting sesh as you buckle down and start figuring out what it is you want to accomplish between now and January. With summer officially on its way out, now’s the time to get any partying out of your system. One last summer hurrah or work-cation in paradise may or may not be in order before you swap out your itty bitty bikini for boardroom trousers.

Read This: Stop what you’re doing and tune into these 10 TED Talks that will inspire you to become a #Girlboss leader. You can thank us later.

The valleys of life, the struggles that we all face, if addressed with hope and perseverance, will lead to a mountain top of breakthrough and joy! 📷: @samevanslife

What’s that? Can’t get away for a mini stint in Maui? Nonsense. Start scrolling through those last-minute travel packages and don’t quit until you find something that works for your hectic schedule. An oceanfront view and sand between your toes is just the thing you need before kicking off a new school year or heading back into the office.

Read This: This just in: We’re sharing 11 Instagram glamping shots that will have you ready to pack your bags. Can you say home sweet home?

Your love life has a strange way of imitating the love triangles aired on Bachelor in Paradise. Now that summer’s winding down, you’ll be forced to either make things officially official with a summer fling or continue your journey for love elsewhere. Can’t decide between multiple suitors? In true JoJo Fletcher style, it may be time to bring in the parentals for some back-up.

Read This: If somehow things don’t pan out by the end of summer, rest easy knowing that a relationship doesn’t define who you are. In fact, science just proved that being single is better for your health. (Photo via Getty)

Enter the week of dynamic duos and collaborative sidekicks. In both your personal and work relationships, you’ll find yourself gravitating toward like-minded creative types. After playing the third wheel on one too many date nights, you’re ready to get back in on the dating game. Swipe right on any Tinder hotties that catch your eye, or better yet, muster up the courage to ask your crush out on a date. You’ve got this, Pisces.

Read This: Make the best first impression ever with these 10 playful first date ideas that aren’t mega awkward. Dinner and a movie is so yesterday. (Photo via Getty)

S-l-o-w down, Aries! After a summer spent rolling with the punches and partying it up at your family’s beach house, it’s time to treat yo’self to a stay-cation at Chateau Aries. While you don’t have to adopt a “no alcohol or carbs” policy, a plan for healthier living is in order. Some outdoor yoga in the park followed by a green smoothie (and maybe a nap in your hammock) will have you feeling almost as good as new.

Read This: It’s time to perfect your roll-out-of-bed-and-go routine with a new game plan. Check out these three morning workout hacks if you hate getting up early. (Photo via Getty)

Summer isn’t over ‘til YOU say it’s over. While everyone else is slowly getting back into the swing of things, you’re ready for round two. Cue the backyard BBQs, swan pool floats and grown-up slip ‘n slides. There’s still time yet to find your summer fling and party it up until the wee hours of the morning. But don’t be mistaken: Summer will have to end eventually, and when that day arrives, you may (or may not be) in for a rude awakening.

Read This: Turn down for what?! Here’s how to have a luxe Miami weekend on a budget. (Photo via Getty)

Don’t be surprised if you have a sudden urge to ditch Friday night’s post-work festivities for a low-key night at home. It’s that time of the year when partying takes a backseat to nesting for fellow Geminis. Give it a week and you’ll be swapping out your go-to bodycon dress for an apron as you practice whipping up some of your great grammie’s recipes in the kitchen. Be forewarned: Having an itch to redecorate and host weekly dinner parties could very well be in your near future.

Read This: Channel your inner hostess with the mostess with these 11 ideas for hosting the most perfect series watch party for The Hills. Catty drama not included. (Photo via Lauren Conrad)

This is not the week to play it safe, Cancer! Don’t you dare walk away from your dream job (or internship) just because you’re scared it may not work out. Let’s not forget how Lauren Conrad will forever be remembered as the girl who didn’t go to Paris. Don’t let history repeat itself by turning down a once-in-a-lifetime opportunity or refusing a cross-country move. It’s true what they say — life begins at the end of your comfort zone. Write this down, repeat it and make it your mantra for September.

Read This: Remember that everyone has to start somewhere. Gear up for your fall internship with these game-changing dos and don’t from Nicole Najafi, founder of Industry Standard. You’re going to want to bookmark this for later! (Photo via Nicole Najafi)

Don’t forget to follow us on Pinterest for more daily inspiration and check out your full AstroStyle horoscope!