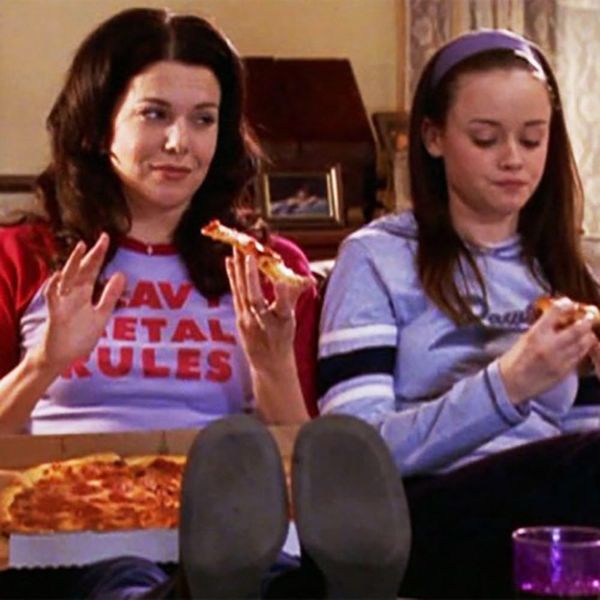 Guys. This week we got to see the first pictures from the Gilmore Girls reboot set, and girl, are we ready for (and binge watching in anticipation of) their return. It’s perfectly normal to go through three emotional stages when watching Gilmore Girls’ Rory and Lorelei eat their way through giant pizzas and sugary cereal. First, it’s hunger, because hey, those pancakes look pretty good. Next, it’s disbelief, as in, “Did Lorelei really eat a donut, burger, popcorn and Red Vines all in one day?” Oh, yes. She did. Finally, you reach the stage of respect. Those Gilmore girls know what they want, and they know how to get it. Most of the time, they want pie. Now it’s your turn to get what you want. Here are 20 recipes Rory and Lorelei would never cook, but definitely eat. Get on it, people!

To understand why Pop Tarts are such a staple in Lorelei and Rory’s home, you have to go back — way back — to Lorelei’s time living under her mother Emily’s roof. For Lorelei, Pop Tarts were a form of rebellion against Emily’s strict rules. Pop Tarts literally taste like freedom to Lorelei. Freedom tastes pretty sweet. (via Hello Natural)

This sweet and crunchy orange chicken recipe is probably not too far off from the Chinese takeout Rory and Lorelei order on a regular basis from Al’s Pancake World. That was after Al got bored with pancakes and moved on to international cuisine. Good call, Al. (via Rasa Malaysia)

As the old adage goes, a donut a day keeps the doctor away. At least, that’s how it goes in the world of the Gilmore girls. If only we could all subsist like Lorelei on the morning ritual of a glazed donut and a hot cup of coffee. (via Handle the Heat)

Pizza is not just food in the Gilmore-verse — it’s a way of life, so much so that Rory hires Italian restaurant Antonioli’s to make Lorelei the biggest pizza in the tri-state area for her birthday. Now that’s love. Pizza love. (via Feeling Foodish)

These healthy blueberry pancakes made with Greek yogurt, coconut and spelt flour are more likely something Sookie would serve to Michel, not the kind you’d find at Luke’s Diner with a big pat of butter and lots of maple syrup. Both are delicious, but the former might take some convincing for Rory and Lorelei to try. (via Stephaniegoldmarie.com)

When Lorelei said, “Well, I’m attracted to pie, doesn’t mean I feel the need to date pie,” to Max Medina, she clearly didn’t mean it. Though Max and Lorelei’s days are long over, Lorelei and pie are still going strong. (via Half Baked Harvest)

While fries are, as Mrs. Kim says, “the devil’s starchy fingers,” that doesn’t stop Lorelei, Rory, Lane and the rest of Stars Hollow from indulging. These fries may be baked in the oven, but they’re so crispy and salty that no Gilmore girl could pass them up. (via Layers of Happiness)

On movie nights, snacks might be more important than the movie itself, but don’t let Rory or Lorelei hear that. This snack mix is the perfect crunchy and salty addition to any movie snack spread. No talking! (via Sempre Dolce)

This tasty sausage gravy over eggs and hash browns would be right at home at Luke’s Diner, provided he’s in a good mood and not in a burning-your-food mood. It’s possible this dish would be enjoyed more by someone like Kirk, who thinks burnt toast is an exotic food. (via Neighborfood)

If there’s one thing Rory and Paris have in common, besides their drive for overachieving, it’s mac and cheese. Whether it’s Rory indulging late at night when she can’t sleep or Paris sneaking it at a study session at the Gilmores’, the girls love mucho mac and cheese. Who can blame them with an extra cheesy recipe like this one?! (via Spicy Southern Kitchen)

This is not your mother’s eggless egg sandwich. This loaded club sandwich is the kind of glorious decked out-sandwich Mrs. Kim would warn Lane about. Unfortunately, if Mrs. Kim is forbidding Lane to eat something, it’s most likely going to be delicious, as is the case with this sandwich made with turkey, bacon and avocado. Yep, Mrs. Kim would not like that. (via Culinary Hill)

This sweet treat combines Rory’s love of Froot Loops with Lorelei’s love of donuts. Just try to imagine how much faster the Gilmores would talk if this was their breakfast every day (Oy with the poodles already!). It’s a good thing Luke doesn’t serve these. (via Sweetest Menu)

In the Gilmores’ book, pizza is a cure-all, even for things like homesickness. Take for instance when Rory felt apprehensive about her first night at Yale. It was pizza that saved the night. Well, actually, Lorelei saved the night, because she brought the pizza. Pizza parties save lives, y’all. This spicy sausage and pepperoni pizza might save yours. (via Table for Two)

It’s Rory’s tradition to gift lots and lots of mallomars to Lorelei every year on her birthday. It’s such a beloved tradition that after eating one of the mallomars that spell out “Happy Birthday Lorelei” on the kitchen table, Lorelei replaces it with another from her pantry. Best birthday tradition ever. (via Tartelette)

It’s not movie night without popcorn in the Gilmore household or even at the local theater. This nacho-flavored popcorn is the perfect snack to have on hand when binge-watching Gilmore Girls. (via The Recipe Rebel)

Part of the Gilmore girls’ way of life is eating a burger every other day from Luke’s Diner. It’s in the official Gilmore girls food pyramid (full disclosure: not a real thing, sorry). These copycat Shake Shack burgers probably aren’t too far off from Luke’s. They’re made using a technique commonly employed in diners with a flat top grill. (via Smitten Kitchen)

The secret to talking a mile a minute while constantly making obscure pop culture references is coffee. It has to be. Nobody else on Gilmore Girls talks as fast or drinks as much coffee as Rory or Lorelei. Learning how to make the perfect cup might help you too, if you have a public speaking engagement in your future. (via Brit + Co)

This rich dessert combines two of Rory and Lorelei’s favorite foods: coffee and donuts. They might even sneak this for breakfast as Luke looks on in horror. Hey, it’s got coffee and donuts in it. It’s breakfast! (via Melanie Makes)

For your next social gathering, consider Rory’s impressive pretzels-of-the-world spread she brought out for her and Marty’s Marx Brothers movie viewing. Or just make these garlic herb pretzels with cider cheese dip. It’ll blow all your pumpernickel pretzels out of the (boiling) water. (via Jelly Toast)

This chicken chow mein is a dish to cheers chopsticks over, Rory and Paris style. It’s not Al’s Pancake World, but it’s home cooked. Rory and Lorelei would be impressed. (via Rasa Malaysia)
From Your Site Articles
Samantha Simon
Pop Culture
More From Pop Culture