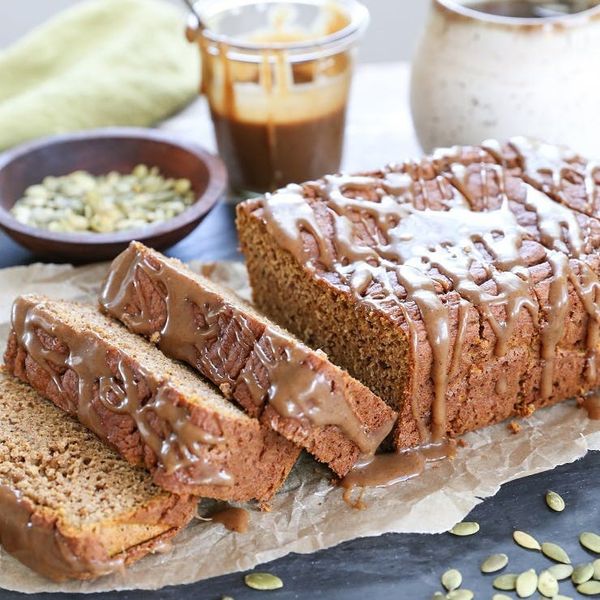 When a chill starts to fall on autumn evenings and the smell of cinnamon fills the air, it's time to break out the bread and pumpkin-laced goodies. Combine the two, and look out! Surely we're not alone, so we gathered up 25 of the best pumpkin breads, rolls, and cakes out there for your enjoyment. Enjoy scrolling through these awesome loaves, whether you like things quick, yeasted, keto, or packed with pumpkin spice.
Pumpkin Pull-Apart Bread: The trick to getting this loaf in the oven in mere minutes: canned biscuit dough! (via Brit + Co)
Pumpkin Biscuits: Fluffy pumpkin biscuits make any meal better. We've even been known to make a meal of them alone. (via Sprinkle Bakes)
Pumpkin Swirl Buns: These aren't cinnamon rolls; they're the way fancier pumpkin swirl buns, thank you very much. (via Handmade Charlotte)
Gluten-Free Vegan Pumpkin Donuts: A not-too-sweet donut full of pumpkin and covered in glaze is exactly how we want to start our mornings this fall. (via Simply Quinoa)
Rosemary Pumpkin Dinner Rolls: Embrace the savory side of squash by flavoring a batch of pumpkin rolls with rosemary. (via Simply Whisked)
Flourless Chocolate Pumpkin Bread: You can whip the batter for this bread up in the blender, no stirring needed. (via Kiribie Craving)
Bread Machine Pumpkin Spice Loaf: Take your bread machine out of hiding and make a batch of fragrant pumpkin pie spice bread instead. (via Noshing With the Nolands)
Pumpkin Cinnamon Roll Bake: Gooey pumpkin cinnamon roll bake is a decadent breakfast that begs to be served with a cup of dark roast coffee. Or, you could be really wild and serve it with vanilla ice cream for dessert. (via Julie's Eats and Treats)
Cream-Cheese-Filled Pumpkin Bread: A thick layer of cream cheese filling makes this moist loaf of pumpkin bread nearly irresistible. (via I Heart Naptime)
Easy Pumpkin Bread Rolls: Serve these pumpkin rolls with a hearty bowl of soup, or slice them in half to become buns for the ultimate Thanksgiving leftovers sandwich. Oh, and PS — no one ever said you *have* to wait until November to make turkey and fixin's just for the leftovers. (via Inside the Rustic Kitchen)
Pumpkin Cornbread: Continuing the debate on whether cornbread should be sweet or savory is this pumpkin-infused dish. Pair it with chili and chowder, or slather it in butter and honey — it's your call. (via The View From Great Island)
Pumpkin Brownies: Boxed brownie mix gets a major upgrade when layered with pumpkin cream cheese filling. (via The Cookie Rookie)
Pumpkin Cranberry Orange Muffins: Cranberry and orange bring a balanced tangy flavor to your morning muffins in this recipe. (via Love and Zest)
Gluten-Free Pumpkin Bread With Chai Caramel Glaze: Almond and brown rice flour give this pumpkin bread a slightly nutty taste that plays well with the spices in the chai caramel glaze. (via The Roasted Root)
Keto Pumpkin Bread: Keto friends will rejoice when you present them with a tray of perfectly baked low-carb pumpkin bread. It's lightly sweetened with a mix of erythritol and stevia, while almond flour steps in for the wheat. (via Keto Connect)
Nutella Swirled Pumpkin Bread: Enjoy the flavor of hazelnut and chocolate in every slice of this decadent quick bread.(via Rasa Malaysia)
Pumpkin Beer Rolls: Make your rolls taste extra pumpkin-y by backing up the flavor with a glug of your favorite pumpkin beer. (via Jennifer Meyering)
Pumpkin Chocolate Chip Bread: The shards of chocolate atop this loaf of pumpkin bread melt in the oven, turning into a no-fuss layer of icing. (via The Cookie Rookie)
Pumpkin Cinnamon Swirl Bread: Give away mini loaves of pumpkin cinnamon swirl bread to your friends and neighbors this autumn and you'll become the most popular person in your social circle. (via Tara's Multicultural Table)
Pumpkin Dump Cake: If you don't *love* to bake, this recipe will save you. Just dump yellow cake mix over your wet ingredients in a pan, and cook until set. (via Passion For Savings)
Vegan Pumpkin Gingerbread With Maple Glaze: Name a more iconic autumn trio than pumpkin, gingerbread, and maple glaze. We'll wait (while polishing off the rest of the tray). (via Hummusapien)
Pumpkin Muffins: Pumpkin muffins topped with honey roasted pecans will give you an excuse to wake up early any morning. (via The Cookie Rookie)
Pumpkin Olive Oil Bread: Olive oil adds a rich texture to this pumpkin bread. It also keeps it from drying out, so you can enjoy it all week. (via Cook Nourish Bliss)
Quick Pumpkin Beer Bread: Caraway and garlic powder take this yeasted loaf in a different direction than the usual pumpkin pie spice. Coupled with your favorite brew, the flavor is totally unique. (via Foxes Love Lemons)
Cinnamon Sugar Pumpkin Donuts: Keep things simple so that the pumpkin flavor really comes through in your baked goods. This recipe skips the heavy glaze in favor of a dusting of cinnamon and sugar. (via The Gourmet RD)

Justina Huddleston
Justina Huddleston is a food writer living in Los Angeles. When she's not busy writing, she spends her time in the kitchen creating both virtuous and decidedly junky vegan food. Buffalo chickpea pizza, anyone? She's also been known to eat a plain block of tofu or beans straight out of the can for lunch, but somehow those culinary adventures don't make it to her Instagram. You can follow Justina on Twitter or see what's cooking in her kitchen on her blog, A Life of Little Pleasures.
Baking
Dessert Recipes
Baking Halloween Recipes Pumpkin
The Conversation
Reviews:
More From Dessert Recipes