Did These Celebrities Have a Better Super Bowl Party Than You? 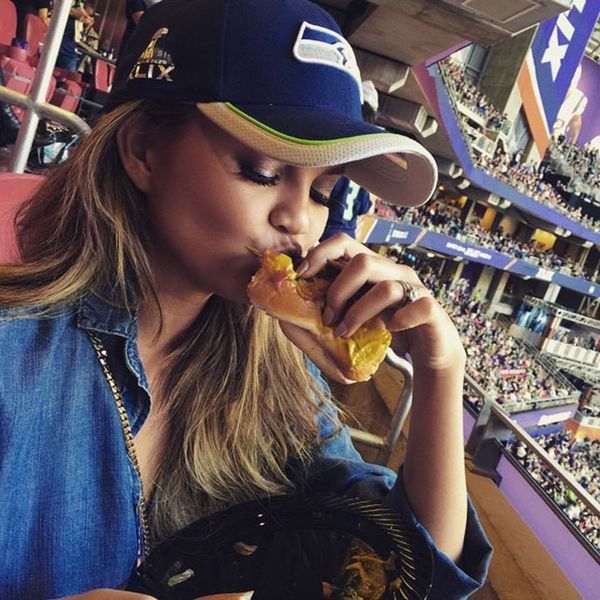 Let’s be honest with ourselves, the Super Bowl isn’t really about the game (right?). It’s all about having fun at a Super Bowl party, the commercials, the halftime show and star-gazing. Some of our fave famous faces attended the big game or watched it from the comfort of their couch like us and had a total blast. How could they not with all the food that accompanies the big game?! Take a peek below and see who partied better: you vs. the stars.

1. Britney Spears + Steven Tyler: The Queen of Pop (and subtle SB49 promo star) brought us back to the 2001 Super Bowl halftime show when she reunited with Aerosmith’s Steven Tyler at the stadium. The only thing missing was Justin Timberlake. #sadface (Photo via @britneyspears)

2. Katy Perry: The California Gurl commemorated her colorful performance with some new ink. Fingers crossed she didn’t roar in the chair. (Photo via @katyperry)

4. Chrissy Teigen: The soon-to-be author always has a blast at every event and shares it with us so we can live vicariously through her. She struck again at the Super Bowl. Seriously, girl has so much fun. (Photo via @chrissyteigen)

5. Drew Barrymore: How cute are Drew and her husband watching the game?! She also showed off her lip synching skills with Jimmy Fallon on his post-game show. (Photo via @drewbarrymore)

7. John Legend: Before the Waffle House double date seen around the world and the Super Bowl kickoff, the R&B crooner practiced his take on “America the Beautiful,” which was indeed beautiful. (Photo via @johnlegend)

9. Gisele Bündchen: The supermodel was glitzed out for the game, while the kids were amped up for their dad’s victory (and probably all the food in their suite). (Photo via @giseleofficial)

10. Jimmy Fallon: The late night host got to the stadium a little early, so he did what anyone would do, toss the pigskin around and practice his games for his post-Super Bowl live show. (Photo via @jimmyfallon)

11. Chris Evans + Chris Pratt: Captain America and Star-Lord joined forces/started a rivalry at this year’s Super Bowl. Either way you look at it, Marvel fans won. (Photo via @prattprattpratt)

12. Mark Wahlberg + Tom Brady: Is it just us or does Marky Mark seem more excited about the big W than the famous QB? (Photo via @mark_wahlberg)

13. Elizabeth Banks: Curious what Effie would think of this real-life version of The Hunger Games… (Photo via @elizabethbanks)

14. Macklemore: We’ve got one question Macklemore: Did you take your Seahawks jersey to the thrift shop after the loss? (Photo via @macklemore)

15. Johnny Weir: While this look definitely wouldn’t keep him protected on the field, it is without a doubt fierce. (Photo via @johnnygweir)

17. Anna Faris, Chris Pratt + Chris Evans: Funny lady Anna didn’t want to miss out on the fun, so she indulged in a football lesson + some beers for the big game. (Photo via @annakfaris)

18. Rihanna: Riri knows how to tailgate. Wonder if she finished the spread in fourfiveseconds. (Photo via @badgirlriri)

19. Mario Lopez: Mario, is there an extra plate for us at your next party because that food looks delicious! (Photo via @mariolopezextra)

20. Hugh Jackman: Looks like Hugh had a tough time deciding which team to root for. We would have just indulged in both pieces, TBH. (Photo via @thehughjackman)

21. Jesse Tyler Ferguson: Yep, not everyone was interested in the game. Points to you Jesse Tyler on the book selection. (Photo via @jessetyler)

So who partied better — you, Chrissy T or Jesse TF?