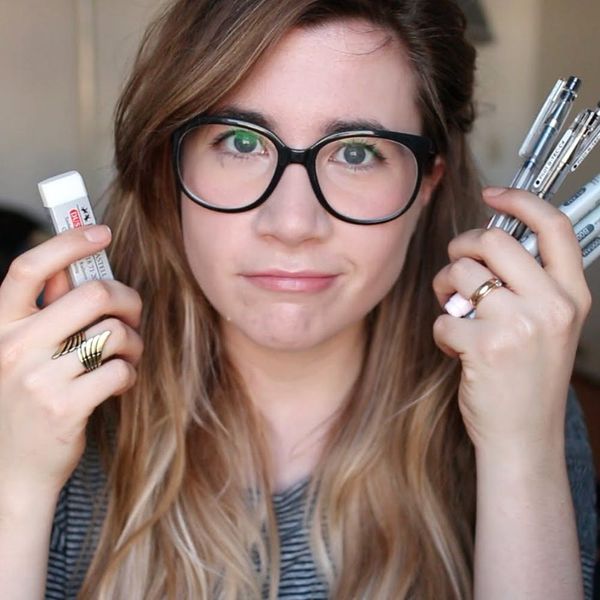 There’s a certain intimacy that YouTube fosters that still feels special compared to other forms of media. It makes sense then that so many YouTubers have become huge celebrities IRL. They have the ability to make millions of people around the world feel like they’re chatting with a best friend over tea by letting us into their bedrooms and daily lives. While we’re all fans of Zoella and Michelle Pham, we’re always on the hunt for the next budding gems. Scroll on to discover our favorite inspiring millennial women on YouTube with relatively small followings (less than 50,000!). They feel like our secret sisters, and they could be yours, too!

1. Rosianna Halse Rojas: Rosianna is the very definition of #GirlBoss. She is best-selling author John Green’s personal assistant, a production executive at 20th Century Fox, a writer, a designer and a lover of Lauren Conrad. She created The Ladies Survey to create a conversation on YouTube about the state of women on the Internet. She even designed this Yes Whale t-shirt inspired by Taylor Swift to remind us all to ride the wave of positivity. And if that wasn’t enough, check out this empowering video she made about standing up for yourself.

2. Defense360: Sadie may only be seventeen, but if teen queen Tavi Gevinson has taught us anything, it’s that teen voices matter and there’s a lot we can learn from them. Watching Sadie’s videos, it’s clear that she is a student of Rookie magazine. If you are a fan of that dreamy, artsy, DIY aesthetic, you will definitely like her. She speaks eloquently about the importance of documenting yourself, going after what you want and why she loves Kanye West.

3. Karakamos: A few years ago, Kara’s video “On Being Ugly” went viral after Hank Green of the Vlogbrothers shared it. In it, she talks about how she falls outside the boundaries of conventional beauty, and her acceptance of that. Her videos on gender expression and shame policing also deserve to go viral.

4. Ceedling: Celia Edell just finished her master’s degree in philosophy, has Ramona Flowers-level amazing hair and makes accessible educational videos about feminism. Watching her videos is like taking an intro to women’s studies class (in a good way!). She’s discussed dating as a feminist, Nice Guys and struggling with Imposter Syndrome. She has also written for HelloGiggles and now vlogs for Everyday Feminism.

5. Tara E.: This college student studying fashion design is an indie darling dream. Her style is always on point, and she gives great advice on friendship, transitioning to natural hair and dealing with the difficult move to college.

6. Melissa Alexandria: Say hello to our new BFF and life coach. She’s a shopaholic-turned-minimalist queen who saved over $30,000 in order to quit her nine-t0-five job and live life on her own terms. Her videos on lifestyle editing, saving money and building a capsule wardrobe will encourage you to think about simplifying your life.

7. Justkissmyfrog: Leena Norms is the Bridget Jones-esque older sister we all deserve. She’s someone you can get wine drunk and have hilarious, deep and meaningful conversations with. Grab a glass of wine and check out her videos on the beauty of living alone, her break-up film survival kit and what it means to be sexy.

8. Fran Meneses: This Chilean illustrator recently moved to London from Berlin. Her accent is lovely and her sense of humor is silly. She also wins for having the best names for her cats: Cereal and Hamburguesa. For all you creatives, Fran has made videos on finding your illustration style, career advice to her younger self and finding inspiration outside.

9. Chrissstttiiine: The Cool Girl myth/archetype should not be perpetuated, but Christine Nguyen is legitimately COOL! She has impeccable taste in minimalist clothing (as seen in her uniform video series), does makeup tutorials on unconventional people like furniture maker/designer/photographer Ana Kras and will show you how to brew a great cup of coffee.

10. JustMargaret: Margaret is your friend who doesn’t BS and will just tell you what’s up. But she isn’t the type to use brutal honesty as an excuse to be cruel. She shows an incredible amount of empathy in every video that she makes, from dealing with judgment as a twenty-something to making decisions that feel right.

Who are some of your favorite hidden-gem YouTubers? Let us know in the comments!

Diana Le
Diana enjoys living in her spinster girl apartment with her cat Slugbug. She loves singing third wave emo songs at karaoke, going out to brunch, hazelnut soy lattes, and the color orange. She likes wearing backpacks because it makes her feel like Mac from "Foster's Home for Imaginary Friends."
YouTube
Lifestyle
YouTube
More From Lifestyle