26 Celebrity Siblings Who Have Appeared Together on Screen 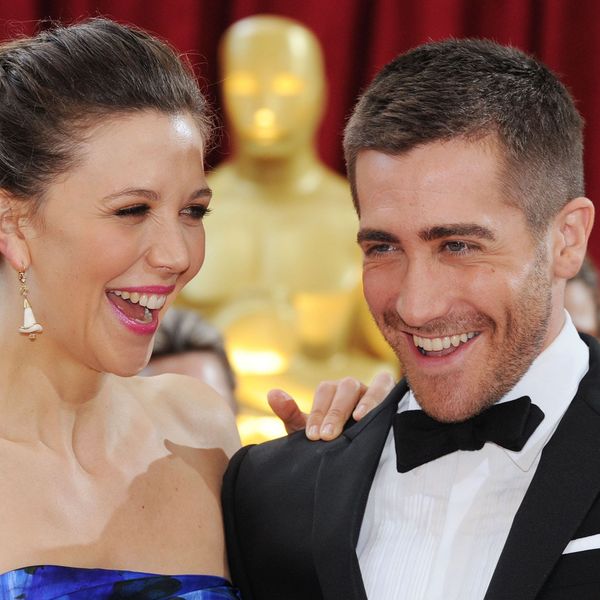 For many successful performers, the entertainment industry is a family business. And while stars like the Olsen twins, the Sprouse brothers, the Deschanel sisters, and the Hemsworth siblings have certainly found fame individually, they also occasionally team up — much to the delight of fans. Check out these 26 famous siblings who have appeared on screen together. (Photos via Dimitrios Kambouris/Getty Images + Kevin Winter/Getty Images + Frazer Harrison/Getty Images + Jesse Grant/Getty Images for Disney)

Maggie and Jake Gyllenhaal: The Gyllenhaals have a long history of working together, going all the way back to when they were children and starred in 1993's A Dangerous Woman, which was directed by their father, Stephen Gyllenhaal. They also appeared on two episodes of Food Network's Molto Mario with their mother, Naomi Foner. But most fans of the pair probably best remember them together in 2001's Donnie Darko.

Interestingly, Maggie had to be talked into the project when the film's director, Richard Kelly, approached her after casting Jake. "Immediately, she was like, 'Richard, you're only offering this to me because I'm Jake's big sister. You should be finding the best actress for the role,'" Kelly recalled to Vox in 2017. "So she was already trying to talk me out of casting her, in a very selfless way. And I was just really impressed by that. … So I was really determined to convince her to do it after that." (Photo via Frazer Harrison/Getty Images)

Dylan and Cole Sprouse: The Sprouse brothers got an early start in Hollywood, sharing a role on Grace Under Fire when they were babies before acting alongside Adam Sandler in 1999's Big Daddy. A few years (and a couple of direct-to-video releases) later, they got their own Disney Channel show, The Suite Life of Zack & Cody, which ran from 2005 to 2008 and spawned a sequel series, The Suite Life on Deck, and a made-for-TV film, The Suite Life Movie. They also teamed up in 2009 for Adventures in Appletown, costarring Nickelodeon's Victoria Justice. (Photo via Frazer Harrison/Getty Images)

Ashley and Mary-Kate Olsen: Like a lot of other siblings on this list, the Olsen twins made their on-screen debut early in life, as Michelle Tanner on Full House. The sisters became so popular that they went on to star in more than two dozen films, shows, and video series together, starting when they were just six years old and continuing into their teens. Among their many titles: To Grandmother's House We Go (1992), Double, Double, Toil and Trouble (1993), It Takes Two (1995), The Adventures of Mary-Kate & Ashley (1994-1997), and You're Invited to Mary-Kate & Ashley's… (1995-2000). Their final acting gig together was 2004's New York Minute. Both Olsens have since retired from Hollywood to instead focus on fashion. (Photo via Dimitrios Kambouris/Getty Images)

Chris and Luke Hemsworth: We're still waiting for Chris to team up with little brother Liam, but until that happens, we'll have to settle for rewatching Thor: Ragnarok, which features a cameo from the eldest Hemsworth brother, Luke. In the film, Luke plays an actor playing Thor in a theatrical re-enactment of Thor: The Dark World, which also features Matt Damon as Loki. (Photo via Jesse Grant/Getty Images for Disney)

Derek and Julianne Hough: The Dancing With the Stars pros competed against each other on DWTS and even teamed up for North American tours in 2014, 2015, and 2017. But before they wowed crowds with their skills on the dance floor, they appeared as extras in 2001's Harry Potter and the Sorcerer's Stone. Julianne also starred in the 2010 movie musical Rock of Ages, which saw Derek make a brief cameo. (Photo via Jason Merritt/Getty Images)

Haylie and Hilary Duff: The Duff sisters have always been close, in work and in life. Back when Hilary starred on the Disney Channel show Lizzie McGuire, Haylie showed up occasionally as the cousin of popular girl Kate Sanders (Ashlie Brillault). And in 2006, the Duff siblings tackled their biggest project together, the film Material Girls, which saw them play — you guessed it — sisters. (Photo via Rachel Murray/Getty Images for Words With Friends 2)

Tamera, Tahj, and Tia Mowry: The Mowry twins found fame on their appropriately named Sister, Sister series, which ran for six seasons from 1994 to 1999. They also appeared together in two Disney Channel movies, 2005's Twitches and its 2007 sequel Twitches Too, in which they played twin teen witches. Tahj, for his part, guest-starred on Sister, Sister in the '90s and later joined the twins in the 2002 movie Seventeen Again (not to be confused with the 2009 film 17 Again, starring Zac Efron). (Photo via Jason Kempin/Getty Images for EGPAF)

Nick, Joe, and Kevin Jonas: Back in 2007, the Jonas Brothers appeared on an episode of Hannah Montana, starring Miley Cyrus, who later took the musical siblings on tour with her. They went on to appear opposite Demi Lovato in 2008's Camp Rock and its 2010 sequel Camp Rock 2: The Final Jam. They also scored their own series, Jonas (later renamed Jonas L.A.), which ran for two seasons on the Disney Channel. And although you didn't see them in Night at the Museum: Battle of the Smithsonian, they lent their voices to the cherubs in the movie. (Photo via Cindy Ord/Getty Images for SiriusXM)

Luke and Owen Wilson: The Wilson brothers have worked together on several films, most notably Wes Anderson's directorial debut Bottle Rocket in 1996. They also worked with Anderson on 2001's The Royal Tenenbaums, which Owen co-wrote. A few years later, their brother Andrew directed them in 2008's The Wendell Baker Story. Luke later admitted that there was a little bit of sibling rivalry on set, telling People of one dispute, "Owen basically said he was done with the scene, and we didn't feel like we'd gotten it. So Andrew is like, 'You're done? You're not going to do it again?' [He] looks at me, and I'm like, 'I can't, you're bigger than he is, just kick his ass. Just kick his ass, man.'" (Photo via Lester Cohen/WireImage)

Dakota and Elle Fanning: The Fanning sisters haven't physically appeared in a scene together, but both can be seen in 2001's I Am Sam, in which Elle played a younger version of Dakota's character, Lucy. They also voiced characters in the English version of My Neighbor Totoro, so be sure to listen for Dakota as Satsuki Kusakabe and Elle as Mei Kusakabe. (Photo via Kevin Winter/Getty Images)

Emily and Zooey Deschanel: The Deschanel sisters rose to fame individually and have generally kept their careers separate, but in 2009, Zooey — the star of Fox's New Girl and films including Elf and 500 Days of Summer — popped up on season 5 of her sister's show, Bones, as a distant cousin of Emily's character, Temperance Brennan. (Photo via Frazer Harrison/Getty Images)

Desiree O
Desirée O is a ‘Professional Bohemian’ who loves anything and everything related to the arts, entertainment, and pop culture. She ADORES being a ‘Newsy’ for Brit + Co, covering all of the latest tidbits of awesomeness that you want to read about. When she’s not writing, she’s either making messy art, going on long adventurous walks with her camera, or poking around over at bohemianizm (http://www.bohemianizm.com/). You can find out about Desirée O and her work at http://DesireeO.com/ or follow her on Twitter @DesireeO.
Celebrities
Celebrity News
Celebrities Celebrity Movies TV
More From Celebrity News