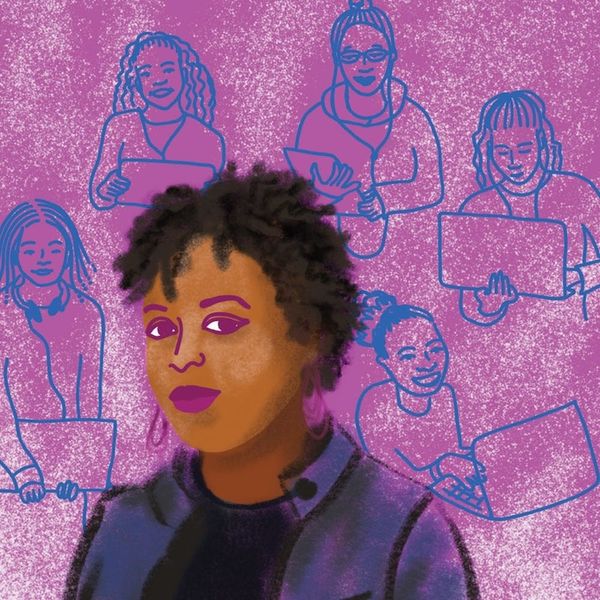 Whether it’s a working mom creating a revolutionary hands-free breast pump, a strong founder leading the #MeToo movement, or a woman working to change access to much-needed feminine products, the camaraderie and support of other females make a huge difference in the success of many amazing ideas and companies. In the new book Girl CEO ($13) by Ronnie Cohen and Katherine Ellison and illustrated by Georgia Rucker, trailblazing entrepreneurs share hard-earned advice about how they launched their illustrious careers. The anthology, geared toward tweens and teens, is packed with wisdom. Here, we share tips from the moguls featured in Girl CEO on how they assembled their girl gangs to keep them moving forward in the face of adversity.

1. Find a community that adores what you do.Rosanna Pansino launched her own baking show in 2011 when she was a struggling actress. Her tasty treats with a geeky spin, like Apple Pi Pie and a Super Mario star-shaped cake, helped her develop a loyal following on her YouTube channel, Nerdy Nummies. Pansino’s dedicated fans were eager for more, and her 2015 bestselling cookbook The Nerdy Nummies Cookbook ($30) cemented her popularity with her 10 million (and counting) subscribers. “I always believed in the YouTube community and myself,” she says.

2. Give back. When fashion designer Tory Burch first launched her company, she believed in what she was doing but was often told that no one would buy online. She writes in the Girl CEO foreword that she kept making phone calls and sharing her ideas. “I assembled a team of amazing people who could help me turn my concept into a collection, and we all worked incredibly hard,” says Burch, founder of Tory Burch Foundation and chairman, CEO, and designer of Tory Burch. Launching her namesake foundation to empower female entrepreneurs is her way of giving back to the strong squad that surrounded her in the early days.

3. Find partners who support your strengths and weaknesses. Actress Jessica Alba is well known for launching The Honest Company, but the start was full of obstacles and investors were skeptical. Alba didn’t have a business or chemistry background to develop the natural home products she wanted to create, so she turned to experts in the field to advise her. “Partner with people who are smarter than you [and] understand your strengths and weaknesses, and surround yourself with people who complement your strengths but could support your weaknesses,” advises Alba.

4. Surround yourself with diverse women. Kimberly Bryant was used to being the only black woman in her engineering and computer science engineering classes at Vanderbilt University, but years later, when she dropped off her daughter at a coding summer camp and noticed her daughter was the only student of color, she knew she had to change things. As the executive director of the nonprofit Black Girls Code, Bryant says, “You have to have women and people of color at the table, or you won’t be able to create products that reach audiences in a way that they’ll want to use them on a daily basis.”

5. Support other women in their goals. If you’ve achieved success in your chosen field, look for ways to support women who aspire to be in the same career. Acclaimed actress Reese Witherspoon founded Hello Sunshine, a media brand dedicated to celebrating women’s stories. “I’m using everything I’ve learned along the way and my own money and celebrity collateral — whatever that is — and I will stand next to anyone I believe in that deserves a different opportunity,” Witherspoon has said. Likewise, Tory Burch used her platform to ask A-list friends, like Witherspoon, to embrace the word “ambitious” as a positive quality in women with her #EmbraceAmbition campaign.

6. Talk about what you want often. While studying engineering at Stanford University, a conversation with a friend about construction toys sparked Debbie Sterling’s interest. As the founder and CEO of GoldieBlox, a toy company geared toward girls, Sterling was often told that her idea wouldn’t sell. “The more people you talk to, the more you will find those who are inspired by what you want to do and want to be a part of it,” says Sterling. “That is really the key to becoming a successful entrepreneur.” Instead of keeping your dreams to yourself, talk about it with everyone. You never know who you might meet who could be a potential ally.

7. Network, network, network. Though it may be uncomfortable to network at social events if you’re an introvert, and the thought of making small talk might fill you with dread, meeting other women is a necessary part of building your crew. Mariam Naficy started her second start-up, Minted.com, by contacting her connections she had made at Stanford, which she found particularly helpful when securing investors. “The network really helped me. I think it helps women a lot with tapping into fundraising because it’s a little bit harder to be taken seriously. A motivated woman with a network is a powerful combination,” she says.

What are your savvy suggestions for gathering your girl gang? Let us know @BritandCo!