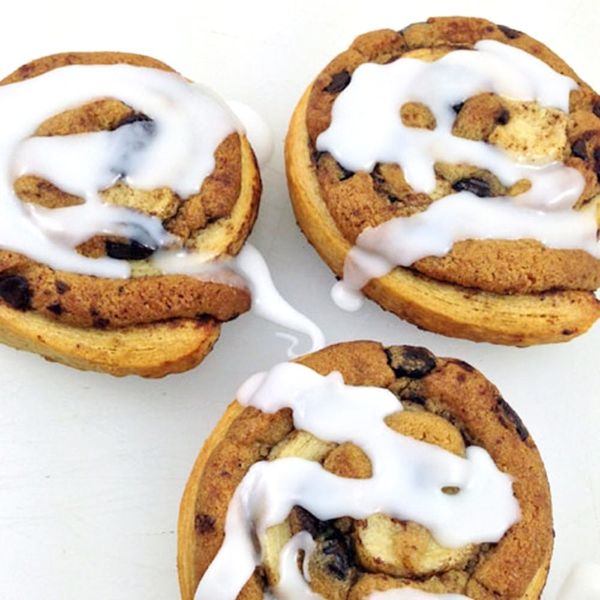 We’ve talked about the hot fashion collabs that were released in time for the holiday season, but we’ve got one more sweet collaboration worth chatting about with your friends. Yep, we’re talking hybrid sweets — two pastries that tied the knot to create a super-hybrid food you won’t find in your local bakery. Scroll on to see the best hybrid sweets of 2014 that had us drooling and asking for seconds. These might just take over the brownie’s top dessert position in 2015.

2. Duffin: The duffin is a best-of-both-worlds marriage between a donut and a muffin. This cinnamon sugar donut in muffin form is guaranteed to satisfy you this holiday baking season. Nothing feels more holiday than a cinnamon sugar dust-coated donut. (via Bon Appetit)

4. Cragel: Did cragel become trendy in 2014? We think so. A half croissant, half bagel creation, it delivers 100% satisfaction. Just imagine a flaky, delicate and buttery croissant merging into a flavorful bagel. A cragel will be exactly how you’ll want to start every day. (via TODAY)

5. Townies: Here is that mouth-watering pastry for ya. A tart and brownie combine to create a sweet creation that’s irresistible. The best part is you can make this at home. What are you waiting for? Head to the oven and bake some townies today. (via The Cherry Share)

7. Maple Bacon Cronut: We’ve talked quite a bit about cronuts here on Brit, and it turns out the cronut is the gift that keeps on giving. This croissant and donut combo can easily morph into so many dessert options, like this flaky, bacon goodness. (via Life Made Sweet)

8. French Pancake: The French pancake can go one of two ways: a pancake dipped in French toast batter, or French toast dipped in pancake batter. Either way, you’re going to be licking your fingers. (via Fashionsnap)

9. Wonut: Forget the hot dog. This year, Chicago became home to the waffle + donut hybrid that had us busting out our waffle irons to explore this brave new world. (via Thrillist)

10. Apple Pie French Toast: This dessert pumps up classic French toast by using apple pie spice batter and sautéed apples with apple pie spice syrup. Even easier than pie, you can whip this up in no time. (via Tablespoon)

11. Coffee “Fudgy” Cake: Coffee cake and fudge? Denser than your normal coffee cake and complete with a fudge-like texture, it’s got ALL the goodies: brown sugar crumbs, blueberries and nuts. We’re totally digging this hybrid dessert. (via Yuka Murai)

Which hybrid sweets are appealing to you? Would you make these at home? Tell us what you think in the comments below!

Yuka Murai
As a fashion writer and official blogger at ELLE Japan, Yuka is always on the hunt for awe-inspiring stories, ideas and products from all over the world. Raised in Tokyo, she currently resides in the outskirts of Portland, OR. She has a two-year-old son and a newborn daughter.
Dessert Recipes
Recipes
Dessert Recipes recipe roundup
The Conversation
Reviews:
More From Recipes