The British Royal Family's Most Memorable Moments of 2018 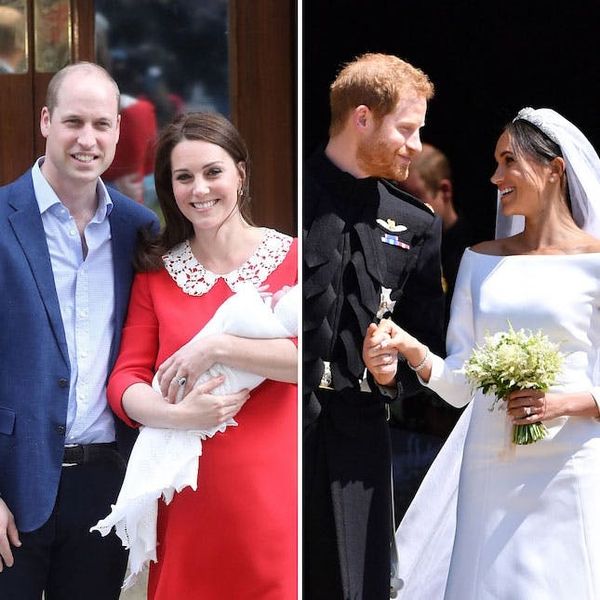 While the British royals are always busy with international adventures and remarkable experiences, 2018 was a particularly lively year for Queen Elizabeth II and her children and grandchildren. Thanks to Prince William, Duchess Kate, Prince Harry, Duchess Meghan, and Princess Eugenie, in particular, there were multiple royal weddings and baby/pregnancy announcements — not to mention some milestone birthdays and trips. Click through to check out the British royal family's most memorable moments of 2018. (Photos via Chris Jackson/Getty Images + Ben Stansall/WPA Pool/Getty Images + Yui Mok/WPA Pool/Getty Images + Tristan Fewings/BFC/Getty Images)

Princess Charlotte's First Day of School: In early January, Kensington Palace released a pair of pictures that Duchess Kate took of Princess Charlotte right before the young royal left for her first day at Wilcocks Nursery School. The princess, who was two years old at the time, posed in a scarlet-colored coat and matching Mary Janes. The only thing cuter than her outfit was the sweet smile on her face. (Photo via HRH Duchess of Cambridge via Getty Images)

Princess Eugenie's Engagement: On January 22, the Duke and Duchess of York, Prince Andrew and Sarah Ferguson, announced the engagement of their youngest daughter, Princess Eugenie, to her longtime love, Jack Brooksbank. The couple got engaged on a trip to Nicaragua earlier in January after seven years of dating. (Photo via Jonathan Brady/WPA Pool/Getty Images)

Queen Elizabeth II's 92nd Birthday: Princess Elizabeth Alexandra Mary was born on April 21, 1926, to the Duke and Duchess of York, who later became King George VI and Queen Elizabeth The Queen Mother. This year marked Queen Elizabeth II's 92nd birthday. As is tradition, she and the rest of the royal family attended the annual Trooping the Colour ceremony, which is held in June but has marked the official birthday of the British monarch for more than two centuries. (Photo via Chris Jackson/Getty Images)

Prince Louis' Birth: On April 23, two days after Queen Elizabeth II celebrated her 92nd birthday, the royals celebrated another birth — that of her sixth great-grandchild, Prince Louis Arthur Charles. The third child and second son of Prince William and Duchess Kate, little Louis is now fifth in the line of succession to the British throne, following his grandfather, Prince Charles; his father, William; his older brother, Prince George; and his big sister, Princess Charlotte. (Photo via Chris Jackson/Getty Images)

Prince Louis' First Official Photos: As she did for Prince George and Princess Charlotte, Duchess Kate took the first official photos of Prince Louis, which Kensington Palace released on May 5. One picture showed Princess Charlotte cradling her sleeping little brother while placing a sweet kiss on his forehead. Another showed the prince wide awake while reclining on a frilly pillow. (Photo via HRH Duchess of Cambridge via Getty Images)

Prince William's Visit to Israel: In late June, Prince William became the first member of the British royal family to make an official visit to Israel since the British Mandate ended in 1948. The five-day trip featured several ceremonial appearances, including a meeting with Israeli and Palestinian leaders and a visit to the grave of Prince William's great-grandmother Princess Alice of Battenberg, who is buried in Jerusalem. (Photo via Chris Jackson/Getty Images)

Meghan Markle's First Solo Charity Initiative as a Royal: On September 17, Kensington Palace released photos of the Duchess of Sussex at the Hubb Community Kitchen at the Al Manaar Centre in West London. The Hubb Community Kitchen was started by women displaced by the Grenfell Tower fire; they had been meeting there twice a week to cook food to take back to their hotel rooms. After first visiting the kitchen in January, Markle collaborated with the women on a cookbook, Together, the proceeds of which are dedicated to making the kitchen accessible seven days a week. (Photo via Ben Stansall/WPA Pool/Getty Images)

Princess Eugenie and Jack Brooksbank's Royal Wedding: On October 12, Princess Eugenie of York married Jack Brooksbank at St. George's Chapel at Windsor Castle. For the ceremony, which included famous guests such as Naomi Campbell, Demi Moore, and Cara Delevingne, the bride wore a gorgeous Peter Pilotto gown designed to show off the scar she received from spinal surgery to correct scoliosis at age 12. (Photo via Yui Mok/WPA Pool/Getty Images)

Prince Harry and Meghan Markle's Pregnancy Announcement: On October 15, just as Prince Harry and Duchess Meghan were about to embark on their first royal tour, Kensington Palace announced that the Duke and Duchess of Sussex were expecting their first child together in the spring of 2019. "Their Royal Highnesses have appreciated all of the support they have received from people around the world since their wedding in May and are delighted to be able to share this happy news with the public," the palace said in a statement. (Photo via Tristan Fewings/BFC/Getty Images)

Pippa Middleton's First Child: On October 15, the same day Kensington Palace announced that Prince Harry and Meghan Markle were expecting a baby, Duchess Kate became an aunt when her sister Pippa Middleton welcomed a baby boy with husband James Matthews. She gave birth to her son, Arthur Michael William Matthews, at the Lindo Wing of St. Mary's Hospital, where Kate had all three of her children, Prince George, Princess Charlotte, and Prince Louis. (Photo via Adrian Dennis/WPA Pool/Getty Images)

Prince Harry and Duchess Meghan's Royal Tour: From October 16 to October 31, Prince Harry and Meghan Markle traveled throughout Australia, Fiji, Tonga, and New Zealand on their first royal tour as a married couple. The 16-day trip included visits with heads of state, various cultural experiences and tourist attractions, and the opening and closing ceremonies of the 2018 Invictus Games in Sydney. (Photo via Dominic Lipinski/Pool/Getty Images)

Desiree O
Desirée O is a ‘Professional Bohemian’ who loves anything and everything related to the arts, entertainment, and pop culture. She ADORES being a ‘Newsy’ for Brit + Co, covering all of the latest tidbits of awesomeness that you want to read about. When she’s not writing, she’s either making messy art, going on long adventurous walks with her camera, or poking around over at bohemianizm (http://www.bohemianizm.com/). You can find out about Desirée O and her work at http://DesireeO.com/ or follow her on Twitter @DesireeO.
Royal Family
Pop Culture
Royal Family Royal Baby Royal Wedding Best of 2018