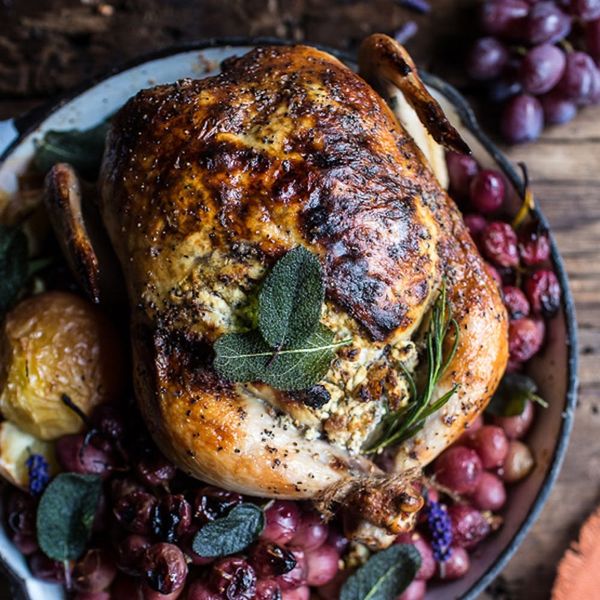 There’s a reason we collectively love holiday episodes of our favorites series, and Friends fans have much to be thankful for when it comes to Turkey Day. Monica, Ross, Joey, Chandler, Rachel and Phoebe were a helluva group to watch gather around the table. From Phoebe’s vegetarian Thanksgiving requests to Chandler’s refusal to eat turkey to Monica’s gourmet standards, there were plenty of LOLs to be had around the apartment come Thanksgiving. And as fans of the show know, there were some interesting side dish choices too. If you wanna cook like one of the gang, here are replicas of some of the Turkey Day dishes they served at their annual Friendsgiving celebration.

1. Sweet Potato Stuffed Pumpkins: Who could forget the episode where Rachel invites her co-worker Tag over for Thanksgiving dinner? Monica goes all-out making an extra sweet potato-stuffed pumpkin for him. You can go just as fancy with this creation inspired specifically by the show. (via Feast of Starlight)

2. Fall Harvest Cider Roasted Chicken With Walnut Goat Cheese and Grapes: Chandler’s refusal to eat turkey on Thanksgiving made having some chicken on hand imperative. If any of your group doesn’t like turkey, this delectable roasted chicken should be a great substitute. You’re going to roast the grapes along with the chicken, giving it an amazingly sweet and fall-like flavor. (via Half-Baked Harvest)

3. Mixed Berry Angel Food Trifle: Remember the one where Rachel decided to make a traditional English trifle for Thanksgiving… and it was a huge mess due to a recipe mix-up? This one isn’t quite as “traditional” as Rachel’s (thank goodness, because Ross said it tasted like feet), but it’s close enough. And, thanks to the angel food cake and cornucopia of delicious berries, it’s also completely delish, so you won’t mess it up the way she did. (via Natasha’s Kitchen)

4. Oven Roasted Brussels Sprouts and Acorn Squash: In “The One With the Late Thanksgiving,” despite all the confusion over whether or not Thanksgiving will take place at all and WHAT TIME everyone should show up (seriously, Rachel, Phoebe, Ross and Joey!), we spot some Brussels sprouts on the Thanksgiving table. We think Monica would totally approve of this rendition, which also features acorn squash, dates and walnuts. (via The Healthy Foodie)

5. Homemade Tater Tots: If you don’t know why we’ve included tater tots on our list, you need to go back and re-watch season one. Joey insists on having some tater tots, and we bet Monica would prefer to serve them homemade style. (via Damn Delicious)

6. Citrus and Herb Butter Roasted Turkey: Of course, the friends didn’t just enjoy random novelty items. Most years, they also had a big, juicy turkey on the table. This super yummy recipe brings out the flavors of your bird with citrus and rich herb butter (we’re talking sage, rosemary and thyme). (via The Suburban Soapbox)

7. Best Mashed Potatoes: What would a proper Friendsgiving be without mashed potatoes?! Pretty much just another dinner, if you ask us. Pro tip: Make sure to bring any add-ins (such as cream cheese, butter, cheese, etc.) to room temperature before adding them in. (via A Spicy Perspective)

8. Low Sugar Low Carb Chocolate Pecan Pie: In “The One With The List,” Monica is determined to make mockolate work. While mockolate (that’s mock chocolate) may not be a real thing, you can in fact sub out traditional ingredients for low-sugar alternatives. Case in point: this low-sugar, low-carb chocolate creation. (via Sugar Free Mom)

9. Super Speedy Double Chocolate Pie: Chocolate pie was supposed to grace the friends’ Thanksgiving table in season 10, but Phoebe and Rachel forget to pick it up. You can whip it up for your own Thanksgiving celebration in a matter of seconds. Almost literally… the base is made from instant pudding. (via Lauren’s Latest)

10. Mama’s Thanksgiving Yams: Yams are featured in almost every Thanksgiving episode of Friends, and we think Monica would totally approve of this super yummy and seasonally fresh dish. Hearty yams are topped with a nut crumble and baked in the oven. Start with canned yams if you want to speed up the cooking process. (via Krista and Michele)

11. Roasted Turkey Legs: You may have missed the food in “The One With the Football,” but Monica serves up turkey legs at season three’s Thanksgiving feast. You’ll be brining these bad boys for a good six to eight hours before cooking them for almost two. They’re *insanely* delicious and totally worth the wait. (via Vodka and Biscuits)

12. Apple Pie: Let’s be real — everyone loves apple pie, even the notoriously picky friends of Friends. This classic American dessert is a must-have in our book, and Monica has served it in a number of Thanksgiving episodes. (via Audrey’s Apron)

13. Leftover Thanksgiving Sandwich With Moist Maker: Surprise! Ross would be psyched to know that you too can whip up Monica’s famous leftover Thanksgiving sandwich at home. It even includes the moist maker — an extra slice of bread in the middle that’s soaked in gravy, adding moisture and flavor to the entire creation. Happy Friendsgiving! (via Nutmeg Nanny)

Maggie McCracken
Maggie McCracken is a freelance writer, blogger and aspiring digital nomad. She writes primarily about food, travel, yoga and healthy living, and she has a background in health and science journalism. You can read more of her work on her lifestyle and travel blog, The Olive Branch.
Fall Recipes
TV
Fall Recipes Friendsgiving Ideas recipe roundup Thanksgiving Recipes
More From TV