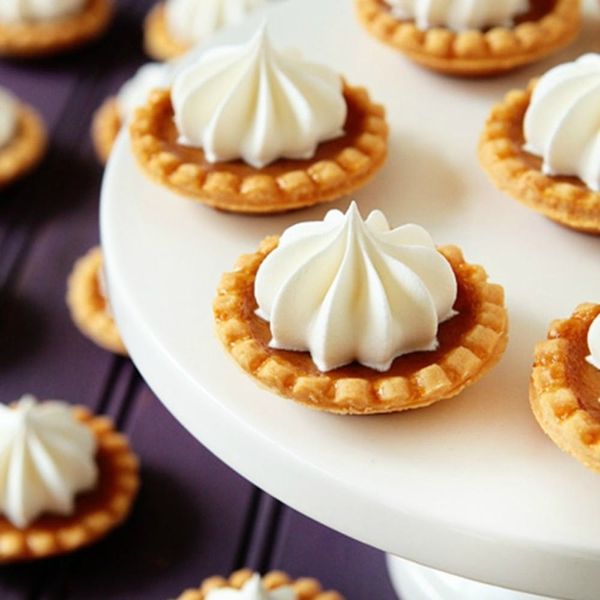 They say that good things come in small packages, and when it comes to mini pies, it's definitely true. Whether sweet or savory, these 31 picks are just perfect for dressing up your appetizer and dessert displays during Thanksgiving, or any upcoming fall gathering. Some of them are even so spectacular, you could serve them alongside (or as!) a main course. Pick your faves, and get ready to impress guests all season long. Sweet and savory cravings, satisfied.

Everyone’s favorite fall comfort food just got a brand new look. Featuring Parmesan cheese and pancetta, this scrumptious dish will tickle your taste buds while warming you up. (via She Knows)

Chilly days and nights call for rich and hearty soups or, even better, these flavorful and flaky mini pies. (via Half Baked Harvest)

Kids and adults alike are sure to gobble up petite pies filled with Parmesan and cottage cheeses. (via Plain Chicken)

Who needs pancakes and pastries? Get your day off to a sweet and savory start with bite-sized breakfast pies. You’ll dig the unique blending of apple, sharp cheddar cheese and bacon. (via Betty Crocker)

Grilling season may be over, but you can still enjoy cheeseburgers with a twist thanks to these simple four-step pies. Served with mini dill pickles and topped with tomato pieces, they’ll be the highlight of the night. (via Betty Crocker)

What would Thanksgiving dinner be without mashed potatoes? Dish up these beef and veggie pot pies as a delectable new way to enjoy them. (via Pillsbury)

Score a game-day touchdown by tossing together buffalo chicken mini pies that are just as tasty (and a bit less messy) as wings. (via Betty Crocker)

Taco Tuesday, anyone? Skip the shells and layer your favorite ingredients on top of Bisquick pie cups for an easy weeknight dinner. (via Girl Who Ate Everything)

Where’s the beef? Hidden inside these gooey-good, Aussie-inspired pies! Bake them in muffin tins, then serve with ketchup and cold glasses of beer. (via Recipe Tin Eats)

Sausage lovers, rejoice. These puff pastry pies flavored with thyme, allspice and nutmeg are about to become a new go-to. (via The Pretty Blog)

Craving something savory but with a little hint of sweetness? Mini pies made with cranberry sauce, brie and chopped pecans are sure to satisfy. (via Something Swanky)

Okay, so these tasty treats aren’t exactly pies. They’re made with brown sugar-sprinkled English muffins, plus Granny Smith apples and pecans, giving you a sweet snack that’s every bit as good as the real thing. (via The Pioneer Woman)

Pressed for time? Five minutes is all it takes to assemble banana cream “pies” made with animal crackers as crusts and a whipped cream topping. (via Jeff Seal)

Sorry, grandma. These chocolatey pecan pies just might be the best Thanksgiving dessert ever. (via Mom on Timeout)

As far as mason jar DIYs go, this one is definitely the most delicious. Follow our tutorial to create scrumptious mini pies using fresh bananas, dulce de leche, whipped cream and chocolate. (via Brit + Co)

Is mint and chip your favorite ice cream flavor? If so, you’ll love feasting on chocolate pudding pies with minty whipped cream topping. They’d be an adorable addition at any gender-neutral baby shower. (via Mom on Timeout)

Change things up at your fall wedding by serving mini apple streusel pies alongside or in place of a traditional cake. Or, pass some around as a late-night snack to help keep everyone partying hard. (via Center Cut Cook)

Build me up, buttercup! These creamy, dreamy pies will never break your heart. (via Lauren’s Latest)

Already counting down the days until Girl Scout cookie season? Luckily, you can enjoy these caramel- and coconut-infused mini pies right now. (via Crazy for Crust)

These lattice-cut pies marry two all-American treats: Oreo cookies and creamy peanut butter. Serve some at your party and watch friends line up to grab ‘em until they’re gone. (via Picky Palate)

Need proof that gastronomical heaven truly exists? Sink your teeth into one (or five) of these tantalizing treats. Featuring sugar cookie cups, vanilla pudding mousse and chocolate syrup, they’re a great non-traditional choice for holiday get-togethers. (via House of Yumm)

Too cold to sit around the campfire? Fear not, because thanks to these mini s’mores pies, you can still enjoy your favorite flavor combo straight through the fall and winter seasons. (via Lil’ Luna)

Get your salted caramel fix outside of Starbucks with Ghirardelli chocolate tarts that take just 45 minutes to make and mere seconds to devour. (via Ghirardelli)

Is your bestie expecting her own little “pumpkin” this fall? Serve these whipped cream-topped mini pies during her shower for a creative twist on the classic dish. (via My Baking Addiction)

Trick or treat! These almost no-bake mini pies are even better than the Reese’s Peanut Butter Cups that’ll soon be gracing your kids’ Halloween candy stash. (via Carlsbad Cravings)
From Your Site Articles
Related Articles Around the Web
Heather Walrath
Heather's a California girl at heart who's learning to live and love life in our nation's capital. When she's not blogging, she's reading, traveling, going to the theater, checking out local wineries and working on her novel. You can follow along with her latest adventures at High Heels & Flip-Flops.
Dessert Recipes
Recipes
Dessert Recipes Fall Recipes Savory
The Conversation
More From Recipes