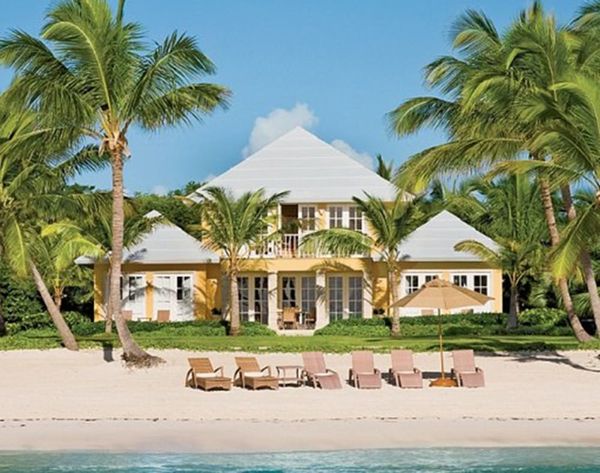 On top of designing a dreamy line of bridesmaids dresses, running one of our fave blogs and basically being an all-around enviable human, Lauren Conrad and fiancé William Tell just showed off their real estate savvy, buying a to-die-for house in her hometown of Laguna Beach. They dropped $8.5 mil on this 2,900 square foot, three-bedroom beaut’ with its own staircase leading down to the beach. Sounds like a perfect home to raise a fam in, don’t you think ;) In honor of LC’s new digs, we rounded up celebs’ most drool-worthy oceanside homes — it may be fall out there, but it’s summer below.

1. Lauren’s New Laguna Mansion: She may be downsizing from the house her parents owned on The Real OC, but we’d say instant ocean access is worth it. This character-filled home is right up the style maven’s alley. (via Parade)

2. Johnny Depp’s Private Island: Forget oceanside, this crib is ocean-surrounded. On top of his own private Caribbean island (how relaxing would that vacay be?!), Depp chills in a gorgeous villa in the south of France. (via Private Island Mag)

3. Celine Dion’s Jupiter Island, Florida Mansion: Celine’s Florida home is basically a mansion inside a waterpark. Not only is it on the ocean, it has pools at the front and back of the house, connected by a lazy river. Say what?! (via Parade)

4. Rosie O’Donnell’s Sarasota, Florida House: Though modest by celeb standards, Rosie’s house is nothing to shake your head at. On top of being oceanside, it has a pool, spa and outdoor kitchen and she’s neighbors with Stephen King. (via Front Door)

5. Katharine Hepburn’s Connecticut Estate: Unlike the other celebs on this list, the Golden Age golden girl inherited this house from her fam, and it was her retreat all her life. She loved swimming in the Sound so much, she’d even take a dip when there was snow on the ground. (via Forbes)

6. Oscar de la Renta’s Tortuga Bay Villa: Oscar has designed some of our all-time favorite gowns, so we’re not surprised his vacation house is just as inspiring. The Dominican villa is decorated in sunny yellows that blend seamlessly into its surroundings while still being super luxurious. (via Architectural Digest)

7. Pharrell’s Miami Penthouse: After that crazy Grammys hat, we expected mad style in Pharrell’s digs, and we weren’t disappointed. His apt is full of sleek design and stunning vistas… and art inspired by Family Guy. (via Forbes)

8. David Bowie’s Balinese-Inspired Villa in the Mustique: It’s Bali, in the Grenadines, inside an ’80s music video. JK on the last part, but David Bowie has created a super serene retreat in his Caribbean home. (via Architectural Digest)

9. Mariah Carey’s Bahamian Getaway: Mariah and Nick Cannon actually sold this house before heading for splitsville, so at least it was one less thing to fight over… and one more gem of an estate for some other billionaire to snap up. (via Private Island News)

10. Goldie Hawn + Kurt Russell’s Malibu House: This is a home worthy of such an iconic Hollywood power couple. The Malibu home and guest house feature an oceanfront patio, outdoor living room and fireplace and a spa in the master suite. (via HuffPo)

11. Taylor Swift’s Rhode Island Mansion: We try not to judge, but buying a mansion super close to your at-the-time BF, Conor Kennedy’s house when you haven’t been dating very long isn’t something we’d do. But we guess if the relationship had to end, at least T Swifty had eight bedrooms and 10.5 baths to cry it out in. (via WKRN)

13. Ellen DeGeneres’s Malibu Home: Forget how gorgeous the house and oceanfront are, Ellen and Portia bought this house from Brad and Angelina. It’s gotta be worth billions just in leftover star power. (via Front Door)

14. Jim Carrey’s Malibu Beach House: Clearly Jim’s a funny man and a real estate genius. We can totally picture ourselves taking a morning run on the beach, then sipping our coffee on that porch. (via Front Door)

15. Sir Richard Branson’s Necker Island: What’s the point of owning a private Caribbean island if you can’t make a profit off it? We’re assuming those were Branson’s thoughts when he converted Necker Island into a private resort. (via Necker Island)

17. Billy Joel’s Hamptons Home: This traditional New England bungalow has a secret up its sleeve: It’s got an inverted floor plan, which means the bedrooms are on the ground floor with the living spaces above. This quirk is meant to maximize the stunning ocean views, and if we had 150 feet of private beach in the Hamptons, we have to admit: We might do the same. (via Curbed + Haute Residence)

18. Khloé + Kourtney Kardashian’s Miami Palace: The Kardashian sisters tend to go big in every aspect of their lives, so the pad Kourt and Khloé crashed at in Kourtney and Khloé Take Miami had to live up to their standards. The 23,000 square foot Palazzo di Mare certainly did. (via Pricey Pads)

What do you think: Drool-worthy digs or straight ridiculous? Would you want to live in one of these super mansions?

Meaghan Pachay
Meaghan's love affair with cooking, crafting and all things DIY began at age eight, with her first reading of Little House on the Prairie. It shows no signs of petering out anytime soon.
Kardashians
Home News
Kardashians Lauren Conrad
More From Home News