15 Foods Improved by a Little Fat and Flour Action 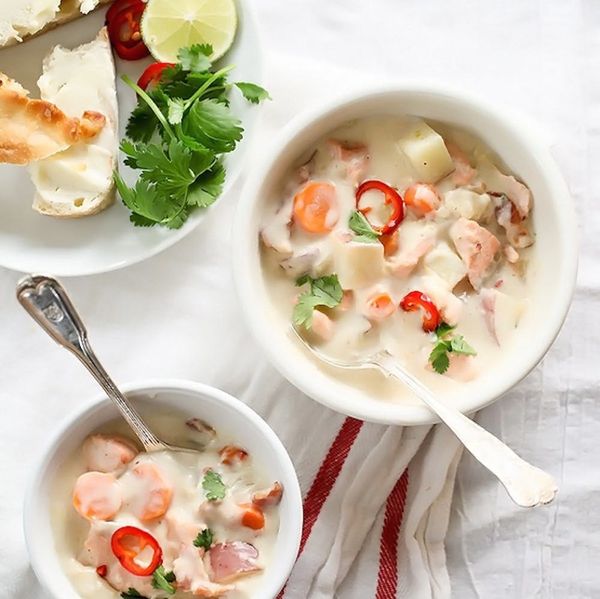 What do homemade mac and cheese, queso and Thanksgiving gravy all have in common? A magic lil’ thing called roux. This mix of flour and fat is the key to making creamy saucesstay creamy until the bowl is licked clean. Beyond that combo, there are a couple of unique twists — think water or fruit in place of butter — to the traditional ingredients. You’ll find a little bit of everything in this collection of 15 roux recipes.

2. Cauliflower Gratin With Garlic and Sage: Cauliflower, are you in there? Let’s just say that between the sage-scented cheese sauce, bacon and breadcrumbs this veg is well disguised. (via Feasting at Home)

3. Sandwich Bread: Water roux (tangzhong) is the trick to making this super soft sandwich bread from scratch. Wonder Bread better watch its back. (via Chilly Frosting)

5. Fish Chowder With Copper River Salmon: Roux does wonders to transform whole milk, coconut milk and just a splash of cream into a totally luxe chowder with a Thai spin. Finally, a tasty bowlful for those of us who shy away from shellfish. (via Foodie Crush)

6. Chicken and Bacon Lasagna: Bechamel takes this lasagna to the next level. You’ll love how it makes an extra creamy casserole that combines the best of both worlds: Alfredo PLUS tomato sauce. (via Kitchen Sanctuary)

7. Fennel Buckwheat Crepes (Gluten-Free): Nutty buckwheat wraps stand up well to a filling of Brussels sprouts, shallots and mushrooms, while a fennel-infused gruyère sauce brings it all together. Feel free to add additional greens or even a poached egg to make these into a substantial brunch option. (via Princess Tofu)

8. Hungarian Bean and Ham Soup: Instead of the usual butter, a roux made from lard (or bacon grease) and flour thickens this paprika-scented ham and bean soup. Using sour cream in place of the heavy stuff adds a nice touch of tang and a more velvety mouthful. (via Saveur)

9. Creamy Bacon, Chicken and Broccoli Bread Bake: It only takes five minutes to throw together this meal. Talk about a terrific option for busy weeknights. (via Recipe Tin Eats)

10. Soft and Chewy Banana Roux Donuts: A roux made from mashed bananas and flour makes donuts unlike any you’ve tried before. Think: fluffy beignet meets banana bread. (via Lady and Pups)

11. Sweet Potato Gnocchi With Buttermilk Mornay, Figs and Prosciutto: Sweet and salty flavors mingle in every bite of these delicious homemade dumplings. (via Local Milk)

12. Japanese Milk Bread (Gluten-Free): No, you aren’t imagining things. Gluten-free bread that stays soft and fresh for days and days is no longer just the stuff of dreams. (via Gluten-Free on a Shoestring)

14. Dutch Croquettes: Packed with flavor, these beefy, oniony fritters are a fun addition to any appetizer spread. We imagine they’d be an especially big hit at your Super Bowl bash. (via The Kiwi Cook)

15. Instant Roux: Save yourself some time by keeping a jar of this instant roux on hand. Simply toast up a big batch of flour and spices, and you won’t have to tend to a pan of roux cooking to nutty brown perfection over and over again. (via Living Well Kitchen)

What are some of your favorite recipes that use roux? Share yours with us in the comments.

Heather Sage
Heather Sage is a gluten-free recipe developer and freelance writer living in Orlando by way of the Silicon Valley. When she isn’t playing around with alternative flours in the kitchen, she can be found tackling DIY projects around the house or exploring her neighborhood. Check out her gluten-free recipe blog, A Sage Amalgam.
recipe roundup
Recipes
recipe roundup
The Conversation