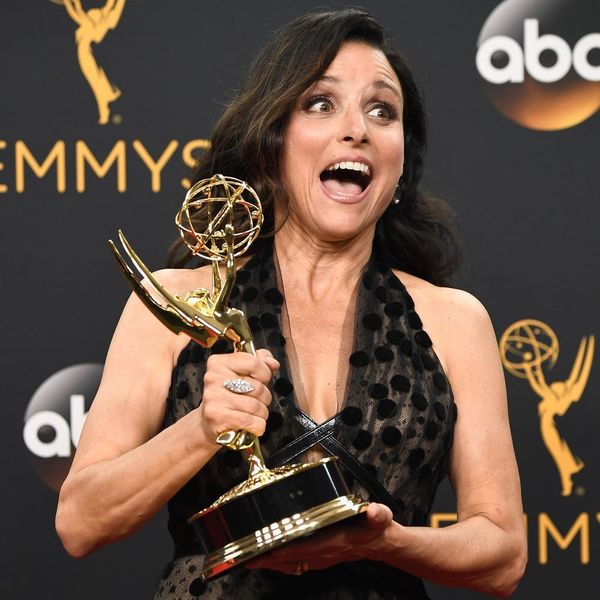 Emmy season is upon us, and that means it’s time to revisit all of our favorite TV shows from the past year! (And to start imagining all the amazing awards season fashion that’s sure to come.) With the Emmy nominations announcement just around the corner on July 13, here are the shows and stars that are getting the most buzz in the top categories, according to the Hollywood insiders at Vanity Fair, Variety, The Hollywood Reporter, and The Wrap.

One of the Emmys’ most competitive categories is Outstanding Drama Series, with Game of Thrones snagging the golden statuette the past two years, Breaking Bad winning in both 2014 and 2013, Homeland in 2012, and Mad Men from 2008 through 2011.

Under normal circumstances, we’d assume that Game of Thrones — with its 106 previous Emmy nominations, including six straight Outstanding Drama noms since its premiere season in 2011 — is a shoo-in for this category, but the show’s July premiere date makes it shockingly ineligible for any nominations.

With GoT out of the running and Breaking Bad and Mad Men over (RIP), Homeland is the only eligible past winner in recent years. Other buzzy contenders include past category nominees House of Cards, Better Call Saul, Mr. Robot, and The Americans, and newcomers The Crown, This Is Us, Stranger Things, The Handmaid’s Tale, Westworld, and The Leftovers.

Tatiana Maslany picked up the Lead Actress in a Drama Series honor last year for the seven characters she plays in Orphan Black, but she’s ineligible to try for a second consecutive win because of the show’s delayed premiere date.

Fortunately, it’s been a good year for women in TV, with past winners Viola Davis (How to Get Away With Murder, 2015) and Claire Danes (Homeland, 2013 and 2012) and past Emmy nominees Elisabeth Moss (The Handmaid’s Tale), Keri Russell (The Americans), Robin Wright (House of Cards), and Evan Rachel Wood (Westworld) all in contention. Newcomers Carrie Coon (The Leftovers) and Mandy Moore (This Is Us) could be giving the others a run for their money, but it’s Claire Foy whose name seems to be at the top of everyone’s list after her Golden Globe and SAG Awards wins in a similar category for The Crown.

Last year’s Lead Actor in a Drama Series winner, Rami Malek (Mr. Robot), is the only recent winner eligible for a nomination in the same role this year, but last year’s Supporting Actor in a Limited Series or Movie winner, Sterling K. Brown, is the name on everyone’s tongue for his leading role on This Is Us.

Also in the running for a nomination are past category nominees Bob Odenkirk (Better Call Saul), Matthew Rhys (The Americans), Kevin Spacey (House of Cards), Liev Schreiber (Ray Donovan), and Kyle Chandler (Bloodline), past Emmy nominee Billy Bob Thornton (Goliath), and Emmy newcomers Milo Ventimiglia (This Is Us) and Justin Theroux (The Leftovers).

Only three shows have dominated the awards show’s most light-hearted category, Outstanding Comedy Series, in the past decade: Veep (winner 2015-2016), Modern Family (winner 2010-2014), and 30 Rock (winner 2007-2009). Not surprisingly, people are predicting that both Veep and Modern Family will be back for more.

Other funny shows whose laughs may be good enough to score a nod include past category nominees Black-ish, Transparent, Silicon Valley, Master of None, Unbreakable Kimmy Schmidt, and Girls, and Emmy newcomers Atlanta and Insecure.

Julia Louis-Dreyfus has swept the Outstanding Lead Actress in a Comedy Series category for the past five years for her work on Veep, and she’s definitely a favorite for another nomination this year.

Past category nominee Tracee Ellis Ross (Black-ish) is in the running after winning a Golden Globe in a similar category, as is Allison Janney, who is vying for a nom in the Lead category after winning her past two Emmys for Outstanding Supporting Actress in a Comedy Series for her work on Mom.

Transparent star Jeffrey Tambor has won Outstanding Lead Actor in a Comedy Series for the past two years, besting four-time winner Jim Parsons (The Big Bang Theory, 2010-2011, 2013-2014). Tambor is definitely expected to appear in this category again this year, while Parsons, who did not score a nod last year, lands on the “maybe” list.

People are also predicting a nomination for Golden Globe winner Donald Glover (Atlanta), while past category nominees who have continued to impress this year include Anthony Anderson (Black-ish), Aziz Ansari (Master of None), William H. Macy (Shameless), and Thomas Middleditch (Silicon Valley).

Which shows and stars would you like to see nominated for an Emmy this year? Tell us @BritandCo!