Friendly Celeb Exes Who Give Love a Good Name 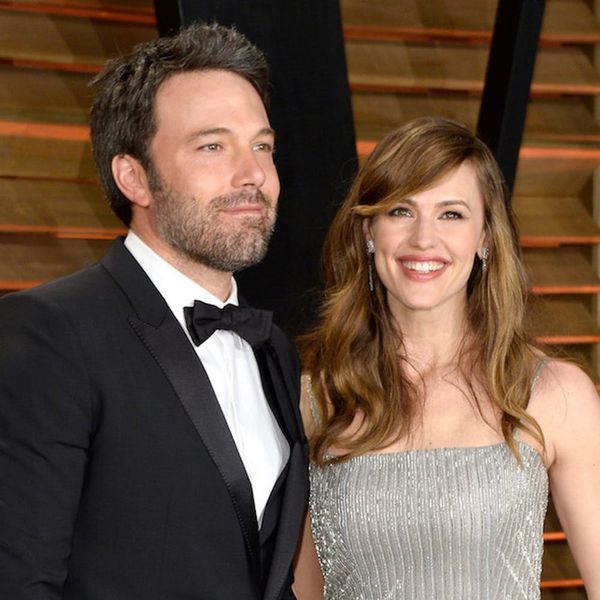 Breaking up and staying friends with your ex isn't easy for most people, even if it's something both of you want. The added stress of going through a breakup under the spotlight can be disastrous, but these Hollywood couples have managed to stay on good terms. Here are some celeb couples who made it work as friends even if they couldn't make it work as a couple. (Photos via Kevin Winter/Getty + Gareth Cattermole/Getty + Pascal Le Segretain/Getty + Christopher Polk/Getty)
Jennifer Garner and Ben Affleck: Throughout a nearly two-year-long separation and eventual divorce in spring 2017, Garner and Affleck remained close, both emotionally and geographically. (He lived in their guest house for several months after their split.) Garner supported Affleck through his addiction issues and rehab, and the two are still amicable co-parents, even vacationing together with their three children. (Photo via Pascal Le Segretain/Getty)
Demi Lovato and Wilmer Valderrama: Though they broke up in 2016 after nearly six years together, Lovato and Valderrama still consider themselves the "best of friends, no matter what." Lovato is also still friendly with ex Joe Jonas — she clearly has the amicable split mastered. (photo via Christopher Polk/Getty)
Emma Stone and Andrew Garfield: These two, who broke up in 2015, are so friendly that fans keep hoping they'll get back together. Though Garfield gave Stone a standing ovation for her La La Land Golden Globe win, it seems like they're just friends for now, and we're kinda totally cool with that. (Photo via Gareth Cattermole/Getty)
Mindy Kaling and BJ Novak: In 2015, Kaling called her relationship with ex-Office costar Novak "weird as hell," telling InStyle, "He is not my boyfriend, but he is not my best friend. I guess you could describe our relationship as 'romantically charged camaraderie with loud arguments.'" Whatever they call it, we say: Cuuuuuuuute. (Photo via Kevin Winter/Getty)
Naomi Watts and Liev Schreiber: When Watts and Schreiber split in 2016 after 11 years together, they said in a statement they were doing it "with great love, respect, and friendship" in their hearts. They also said they were "looking forward to raising [their] children together and exploring this new phase" of their relationship. They've continued to do just that. (Photo via Jonathan Leibson/Getty)
Mariah Carey and Nick Cannon: Even after being divorced for a few years, Cannon told Howard Stern in early 2017 that he would never stop loving his ex-wife. Add that to their frequent — and ADORABLE — family outings and dinners, and it's no wonder people continue to speculate about a reconciliation. (Photo via Charley Gallay/Getty)
Reese Witherspoon and Ryan Phillippe: Their fated aughts romance may be but a distant memory, but Witherspoon and Phillippe have remained close for the sake of their two now-teenaged children. (Photo via Kevin Winter/Getty)
Gwyneth Paltrow and Chris Martin: Following their infamous 2014 announcement that they were "consciously uncoupling," Paltrow and Martin continue to this day to co-parent their two children, Apple and Moses. They not only do birthday parties and vacations and everything in between together, but they look happy — and even pose for selfies — while doing it. (Photo via Charley Gallay/Getty)
Miranda Kerr and Orlando Bloom: Both Kerr (who is now married to Snapchat founder Evan Spiegel) and Bloom have been open about how painful their 2013 divorce was. (Kerr even concocted a special holistic remedy for her heartbreak.) Somehow, though, the two remain good friends and co-parents to their son. The real sign of modern, friendly exes? They often give each other shout-outs on social media. Aww. (Photo via Larry Busacca/Getty)
Lisa Bonet and Lenny Kravitz: Early '90s dream couple Bonet and Kravitz separated in 1993 after having daughter Zoë Kravitz in 1988, but the pair are so close that they still hang out even without their now-adult daughter. They also make frequent red carpet appearances as a family. Kravitz has called Bonet — now married to Jason Momoa — his "best friend." Too cute. (Photo via Dimitrios Kambouris/Getty)
Jennifer Lopez and Marc Anthony: Lopez and Anthony separated in 2011 after seven years of marriage, but their divorce wasn't finalized until 2014. A drawn-out split can be hard on a couple, but these two have made it work. Not only do they remain close co-parents to their twins, but they're also still co-workers: They released an album in 2016, shared a friendly kiss onstage at the Latin Grammys the same year, and are working on Lopez's forthcoming Spanish language album together. Power (ex) couple, much? (Photo via Kevin Winter/Getty)
Diane Kruger and Joshua Jackson: They broke up in 2016 after a decade together, but they still actively root for each other to succeed. A year after their split, Jackson made sure to publicly congratulate Kruger on a major career high, achieving a new level of #breakupgoals. (Photo via Jason Merritt/Getty) What celeb couple split made you the saddest? Let us know @BritandCo!

Are you friends with any of your exes? Tell us @BritandCo.