12 Celebrity Friends You Forgot Were BFFs 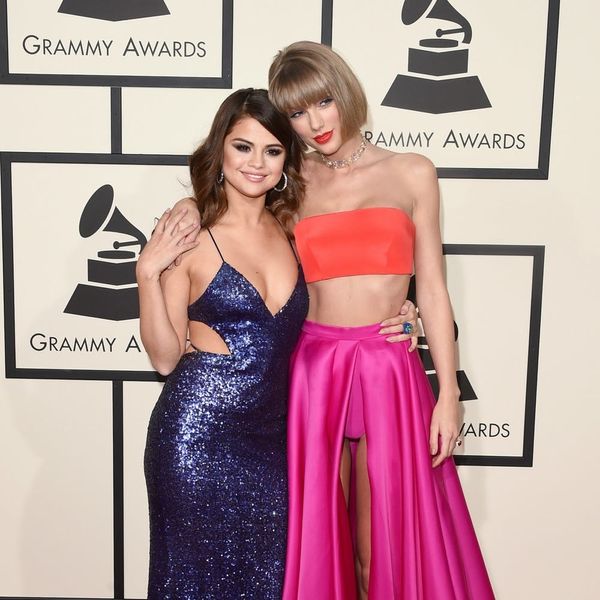 Yesterday was “officially” National Best Friends’ Day, but not to worry: It’s never too late to celebrate your top platonic boo. So go ahead and plan a killer BFF date or throw together a thoughtful care package to send your long-distance bestie, and consider these 12 celebrity best friends who are legit #FriendshipGoals:

1. Kendall Jenner and Gigi Hadid: These two are the epitome of celeb BFFs. Kendall and Gigi do EVERYTHING together. From walking the runway in their shared first Victoria’s Secret runway show to swapping hair colors with each other for a gig, Kendall and Gigi are two peas in a pod. In fact, they might even be related (kinda sorta)! (Photo via Dimitrios Kambouris/Getty)

2. Taylor Swift and Selena Gomez: Though Taylor has a whole slew of Hollywood amigos, it’s Selena that seems to be her ride or die — after all, the two have known each since Selena was 13 and Taylor was 16, and for Taylor, that history means the world. She told E! back in 2014 that “longevity is something you really can find very precious and rare in relationships.” Too true, Tay. Too true. Whether they’re wowing fans onstage during one another’s tours or getting ready for red carpet events together, Selena and Taylor have each other’s back through everything from breakups (Selena with her infamous split from the Biebs; Tay from Harry Styles) to career success, and it’s pretty cool to witness. (Photo via Jason Merritt/Getty)

3. Amy Schumer and Jennifer Lawrence: There’s nary a more fearsome twosome in Hollywood than Amy Schumer and Jennifer Lawrence, AKA, “A-Shue” and “J-Law.” Their epic vacay photos had us green with envy, and we thought it was seriously sweet when Jen surprised Amy after she won her Emmy. The two grew so close, there has even been talk of a reality show! No updates there yet, so in the meantime, we’ll continue to revel in the glory that was the duo’s first onscreen moment at the Golden Globes. (Photo via Paul Drinkwater/Getty)

4. Chrissy Teigen and Kim Kardashian West: As two power moms in Hollywood, Chrissy and Kim have a lot in common. So much so, in fact, that they’re pretty much BFFs nowadays. From Kim’s pregnancy advice and their maternity shopping sprees to their super adorbs brunch where “auntie Kim” met Chrissy’s daughter Luna, these two (and their musical spouses) could be the modern-day Laverne and Shirley (okay, okay, maybe that’s a stretch). (Photo via Dimtrios Kambouris/Getty)

5. Adam Levine and Blake Shelton: These two might play the part of rivals on The Voice, but IRL, they’re basically the next Ben and Matt (see below for those OG besties). Blake reportedly even stayed with Adam while going through his divorce from Miranda Lambert. According to Blake, the pair works due to their… lack of commonality? As he told Country Countdown USA, “I think the thing that’s our bond is we come from such different worlds. I find we’ll get into conversations where we just pick each other’s brains. We’re interested in, ‘Why are you so weird?’” Case in point? Blake recently offered the ultimate showing of pregnancy empathy to Adam’s fiance Behati Prinsloo by showing off his very own baby bump. Okaaaayyy, then. (Photo via Kevin Winter/Getty)

6. Vanessa Hudgens and Ashley Tisdale: Getting their big breaks opposite one another in Disney’s High School Musical more than 10 years ago (the cast had an epic 10-year reunion back in November), Vanessa and Ashley are still each other’s biggest cheerleaders. Vanessa ‘grammed about Ashley’s new makeup line earlier this week, writing, “So proud of my girl @ashleytisdale for launching Illuminate Cosmetics.” Need further proof? Vanessa walked down the aisle in 2014 as one of Ashley’s bridesmaids — it doesn’t get much closer than that. (Photo via Alberto E. Rodriguez/Getty)

7. Demi Lovato and Iggy Azalea: While not the most likely of pairs — the recently single Demi is a pop star through and through while Iggy’s slightly more edgy with her “Fancy” rap game — Demi says that she and Iggy became friends due to their close proximity: The two are actually neighbors. “It was so cool to meet someone who is really real,” Demi said. From there, the two seemingly took on the world together, performing at the VMAs (complete with an epic post-VMAs pizza party), building Gingerbread houses and even celebrating life milestones — Demi is set to be a bridesmaid in Iggy’s wedding. (Photo via Frazer Harrison/Getty)

8. Ben Affleck and Matt Damon: Like we’d ever forget the OGs of best friends forever, Ben Affleck and Matt Damon. Chums since they were young boys, this twosome famously broke into Hollywood together with their screenplay Good Will Hunting back in 1998, and the rest of their famedom is history. They’re closer than ever today — literally — with Ben hilariously smuggling Matt into Jimmy Kimmel Live underneath his suit just this February. (Photo via Frazer Harrison/Getty)

9. Jennifer Aniston and Courtney Cox: The most beautiful woman in the world, Jennifer Aniston, and her longtime bestie Courtney Cox have famously been the best of friends ever since their stint on… yes, Friends. Most recently reuniting for the show’s reunion, there have been some rumors of a blowout between the two. But even the best of friends tiff from time to time, and if Rachel and Monica can survive Rachel moving out, we think Jen and Courtney will be juuust fine. (Photo via Alberto E. Rodriguez/Getty)

10. Drew Barrymore and Cameron Diaz: Another pair of pals that knew each other way back when, Drew and Cam ran in similar circles during their teenage years. They’ve practically grown up together, and now the actresses have skydived together, as Drew hilariously depicts in her novel, Wildflower, and made movies (helllooooo Charlie’s Angels!) side-by-side. (Photo via Chris Jackson/Getty)

11. Tina Fey and Amy Poehler: Friends long before they were famous, these two started what would become their lifelong journey together back in Chicago at ImprovOlympic. It was Tina who got Amy onto SNL, as she shares in her book, Yes Please. From there, these gals went on to rule the world, co-starring in Mean Girls, Baby Mama and, most recently, Sisters, as well as performing SNL‘s weekend update and co-hosting the Golden Globes not once, not twice but three times. That’s staying power, alright! (Photo via Stephen Lovekin/Getty)

12. Charlize Theron and Emily Blunt: These two are far more than just Huntsman: Winter’s War co-stars, as Charlize proved when she threw Emily Blunt an epic baby shower over Memorial Day weekend. Emily’s no slouch in the supportive department, either: She was seen celebrating the actress’s 40th birthday with her back in August. (Photo via Kevin Winter/Getty)

Which famous duo is your favorite? Let us know over @BritandCo!