29 Ponytails That are Anything But Boring 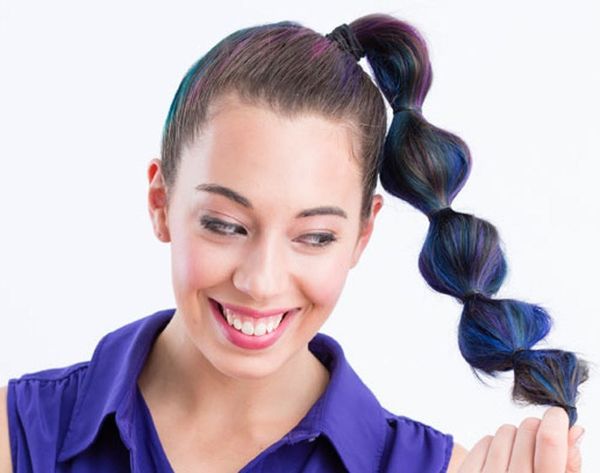 Okay girls, let’s set the record straight: Ponytails are not reserved for bad hair days and sweaty workouts. Up your game with these 29 looks that are anything but boring. Ditch the average and giddy up with looks that totally outdo the basic pony plus elastic. What are you waiting for? Pony up.

1. Three Elastic Pony: Not in the mood for fancy tricks and accessories? Save yourself some time and up the style factor by getting creative with elastics. (via Brit + Co)

2. Dip-Dyed Pony: Make a statement and get on the dip-dye trend with a knockout ponytail. Create a bold streak that won’t last forever with hair chalk or clip-in extensions in your fave color combos. (via InStyle)

3. Chained Pony: Channel that “Genie in a Bottle” look and repurpose a simple chain necklace by attaching it to bobby pins to drape against your ponytail. (via Brit + Co)

4. Lace Pony: Play with texture and dress that tail up with a bit of lace to achieve this romantic look. Whether you’re getting married or feeling festive, pick your fave lace to accent those locks. (via Bridal Musings)

5. Segmented Pony: Feeling funky? Arm yourself with a bunch of elastics and knot that pony into segments. This look works best for gals with long locks. (via Brit + Co)

6. The Pony Fish: No, this is not a mythical creature. The Pony Fish is the real deal. Create this look by combining a fishtail braid with a ponytail. You’ll be turning heads whichever way this PonyFish swings. (via Free People)

7. Double Braided: Take your mane from drab to fresh, flirty and fun with the addition of double braids. This look appears to take more effort than it actually does, but you don’t have to tell anyone. (via Divine Caroline)

8. Tiered Pony: Take this tiered pony to the gym. It stylishly secures your hair off your face. Someone in need of an extra pony tail holder? No big deal, simply remove the bottom one, and you’ll still look fabulous. (via Fashercise)

9. Romantic Topsy Turvy Ponytail: Need an update on the topsy-turvy ponytail from your youth? Get it here, and if you want to dress it up even more, clip a flower in it. (via Caught on a Whim)

10. Ponytail Bow: When in doubt, put a bow on it. Master this incredible ponytail with our simple tutorial, which comes with three different ways to sport the look. (via Brit + Co)

11. Knotty Pony: Don’t worry; it’s knot as messy as it sounds. This ponytail won’t leave your hair tangled. Instead, it’ll make your mop look ab fab in under five minutes. (via Brit + Co)

12. Twisted Side Ponytail: Get your hair off your neck by tossing your ponytail off to the side. Add some flirty fashion with a twist, and you’ve got a look that goes from day to night with ease. (via A Beautiful Mess)

13. French Twist Ponytail: Receive a flurry of “oh la las” when you fashion your ponytail like the French. (via Refinery29)

14. Cross ‘n’ Wrap: From boho fab to little black dress, take this twisted pony with you wherever you go. Meet your new, fave ponytail style. (via Brit + Co)

15. The Multi-Inverted Side Pony: Want to make a statement? Update a side ponytail by twisting your locks into flirty segments. (via Divine Caroline)

16. Triple Twisted: Arm yourself with a steady hand and bobby pins to take the average pony from, well, average to stellar, all with a simple twist. (via Twist Me Pretty)

17. Twist Wrapped: Have some loose ends? This twisted pony is here to show them off. Simply gather them together, twist and secure with elastic. (via Refinery29)

18. Totally Twisted Low Pony: Feel fresh and get away with this easy-breezy low pony that actually looks like it took some effort. Nothing beats messy updos in the summer heat. (via Brit + Co)

19. The Low Rider: Check out this super fresh look that will have you forgo topknots and regular ponies. Whether you’re doing squats or heading out for drinks, opt for this low-rider pony that shows off a bit of fishtail flair. (via Refinery29)

20. The Pho-ny Pony: Be a show pony with this faux pony… no extensions necessary. This magical feat is achieved by creating two ponytails and blending them together to create the Pho-ny Pony effect. Brilliant. (via Female)

21. Knot It Up: You didn’t have to graduate from the Girl Scouts to master this knotted ‘do. Just knot your ponytail up in a matter of minutes. (via Brit + Co)

22. Wide Wrap Pony: If you’re blessed with long locks, you’ve got to try this sleek take on the pony. Simply smooth, wrap and secure. (via Brit + Co)

24. Messy Over the Shoulder: Kill it in the gym or at happy hour with this messy look that can take you from the treadmill to cocktails in a cinch. (via Cosmopolitan)

25. Pinned Up Pony: Definitely not your average pony, this pinned up version adds texture and volume. (via Hair Romance)

26. Vintage Glam Side-Swept Pony: Try this sleek and sophisticated side pony when you want to feel glam. This tutorial is a nod to timeless vintage style. (via Refinery29)

27. Sleek Ponytail: With a girl next door attitude, bright lips and sexy shades, this sleek look is all you need before you head out for the day. (via A Cup of Jo)

28. The Part-Happy Pony: This easy-to-execute hairstyle shows off sleek, straight hair in a sophisticated fashion. (via Refinery29)

29. Ponied Up Perfection: Flashback to the 1950s with this hot-mod pony that is sure to channel anyone’s inner Megan Draper. (via Brit + Co)

Have you upped your ponytail game? If so, share with us your best in show in the comments below.

Michelle Swift
Michelle Swift is a freelance writer and blogs on michelleswift.com. She has an affinity for running, culinary eats, travel and sparkly gold things. People and adventure light her up like a hot pink neon sign!
Ponytail
Hair
Ponytail